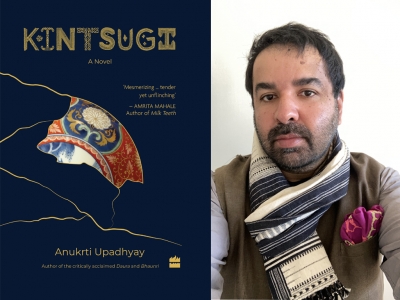 New Delhi– ‘Kintsugi’ is the ancient Japanese art of mending broken objects with gold, and designer Ishan Khosla has delicately woven this concept into the jacket for a similarly titled novel authored by Anukrti Upadhyay to win the seventh edition of the Oxford Bookstore Book Cover Prize that was announced on Thursday evening, with a jury member declaring it to be “astonishing”.

“Designing a cover is not an easy task. On one hand the cover must be bold enough and interesting enough to grab the attention of the passer by or the scroller. On the other it must convey the essence of the book literally or metaphorically,” Khosla, who has an MFA from New York’s School of Visual Arts and runs a hugely successful design studio in the national capital, told IANS after the award was announced.

“For Kintsugi, it was as much a joy to design the cover as it was to read the book. I worked on various concepts as one always does trying to bring about the various qualities of the book, the fragmentary nature, the evocative and mesmerising quality of the writing and the fragility of the human experience,” he added.

“Kintsugi is an astonishing book cover,” Kunal Basu, one of the five members of the jury, which was headed by parliamentarian and author Shashi Tharoor, said.

“Intricately illustrated, it conveys the superior craft of the creator, and draws one’s eyes into the heart of the book. The design has served each of the three purposes of a successful cover: ability to garner attention; imply the theme of the book, and achieve a high aesthetic standard. It has transformed the book into a precious artefact that is a pleasure to cherish and preserve,” Basu added.

‘Kintsugi’, published by Fourth Estate, is a novel about young women breaching boundaries, overcoming trauma, and challenging the social order. And about men surprised by women who are unconventional, unafraid and independent. It is the story of Meena, rebellious and unexamined, and Yuri, as complex as Meena is naive.

There’s Hajime, an outsider to two cultures, and Prakash, unable to see beyond his limited horizons. It is also the story of Haruko who has dedicated herself to her art, and of Leela who is determined to break gender roles and learn the traditional gold-craft of her community.

Set between Japan and Jaipur, “Kintsugi” follows the lives of these characters as they intersect and diverge, collide and break and join again in unexpected ways. The result is a brilliantly original novel as profound as it is playful, as emotionally moving as it is gripping.

Portraying this complexity is no easy task and Khosla has executed with elan.

In addition to the winning book cover, three more designers were honoured with Special Jury Awards in appreciation of their remarkable command of graphics and visual narrative. These designers are Maithili Doshi for “Turmeric Nation” published by Speaking Tiger; Shashi Bhushan Prasad for “The Maharaja of Jodhpur’s Guns” published by Niyogi Books and Gavin Morris for “Estuary” published by Eka.

“In these times of uncertainty and anxiety caused by pandemic and war, it has been very exciting, indeed, to encounter so much style and substance in the excellent entries, to see the collaboration between graphics, illustrations, images and text,” Priti Paul, Director Apeejay Surrendra Group and one of the jurors, said.

“Book design and aesthetics are evolving every year, celebrating originality, creativity and reflecting reality. On the occasion of Oxford Bookstore’s Century in Books – and to reiterate our celebration of the best in publishing — we are proud to announce an important new initiative – the First Oxford Bookstore Art Book Prize,” she added.

With a prize money of Rs 1 lakh, this award will holistically assess the variety of genres flourishing under the umbrella of the art publications. It aims to identify the experiments with the narratives and material, critical approach to the subject, and innovative formats performed by the artists to give an explicit account of their practice.

The new prize would move beyond its conventional definition and include accordion books, graphic novels, pop-up arts, photo books, and zines. Significantly, it would acknowledge the role played by the books in the process of dissemination of the knowledge of art and culture while recognising the balance between print production, graphic illustration, and overall design appeal. (IANS)