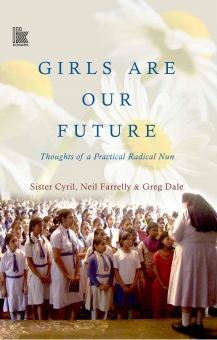 An Irish nun came to Calcutta (now Kolkata) in 1956 and soon adapted herself to the city. Sister M. Cyril Mooney, fondly called Sister Cyril, is now looked upon as a motherly figure who has not only saved the lives of many but also brought in necessary educative reforms during her tenure as head of one of the most prestigious schools in the city.

Having devoted her life to social welfare programmes in India for more than six decades now, Sister Cyril has a lot to teach — from the need to create awareness on various issues to her ideology and concept of religion.

And it is her experience in different aspects of life that have been brilliantly captured in this book, which is a vivid compilation of Sister Cyril’s thoughts on a wide variety of topics — education, life, sexuality, social issues, religion — that she has tackled throughout her tenure as head of the Loreto Girl’s School, Sealdah.

Sister Cyril has played a major role in reforming the education system in Kolkata, particularly at Loreto Girls School. She fiercely battled the inequality in India’s classrooms and got 50 per cent of the seats reserved for those students who hail from economically struggling families.

She has been a ray of hope for many; she saved the lives of many by turning the school into a shelter for those abandoned and street girl children who would often turn victims of sexual exploitation. She has been the flag bearer of social work in the City of Joy.

The book also highlights Sister Cyril’s thoughts on contemporary issues like the importance and relevance of proper sex education in school, why environmental studies shouldn’t be restricted to only theory but should also include practicals, the need for educating boys to respect women, need for compassion while dealing with children, and empathy for those who cannot even afford two meals a day.

Sister Cyril never wanted to write her autobiography. So this book is a compilation of her thoughts, interviews, experience of her students and other teachers.

“God. Religion. Jesus Christ. Catholicism. Priests. She is only too aware of people’s fears and prejudices when they hear those words, and I think she’s trying to get beyond all of that,” book co-author Neil Farrelly writes in the preface.

Sister Cyril claims herself to be a very practical human. She writes: “Look, I’m practical. Here we’re all practical. A lot of foreigners go out to places like Eastern Bypass (in Kolkata), take one look at the living conditions and say, ‘poor things, poor things’. I say, don’t pity them, do something for them!”

Sister Cyril has always opposed the concept of competition and strongly believes that merit is a myth. “We need to teach children that it is important to know how to accept failure and be able to realise that they’re not going to be on top all of the time,” she says.

Sister Cyril has been the innovative brain behind many of her social work initiatives like “Rainbow Homes”, the “Brickfields Project” and “Barefoot” which helped tremendously in educating children belonging to the poorest sections of the community.

Not just her words of wisdom, but the book has also given space to her students and teachers who have worked under her guidance and fondly remember how Sister Cyril had influenced their lives.

It’s quite an inspiring read. (IANS)