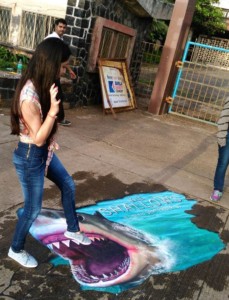 Mumbai– Sony Pictures Entertainment launched an innovative marketing campaign for the forthcoming adventure thriller “The Shallows” by painting select potholes here with a 3D image of a ferocious shark ready to launch an attack.

Since people have issues because of potholes every monsoon and because rains leave the city roads completely ravaged leading to a number of road accidents, Sony Pictures Entertainment’s marketing team came up with a unique idea to attract the attention of the authorities, citizens and the media to the biggest civic issue that concerns us all.

Commenting on this, Divya Pathak, Director – Marketing, Sony Pictures Entertainment, India, said in a statement: “We wanted to do something meaningful as a part of the promotion plan for our next release ‘The Shallows’.

“In the rush of our daily lives, we tend to ignore the poor conditions of our city roads. We hope that through this campaign, we are able to catch enough eyeballs and draw attention to this problem of potholes which are as dangerous as sharks.”

Vicky Kaushal: Being in love is the most beautiful feeling in...

Armaan Malik: ‘Sun Maahi’ talks about the ethereal feeling of being...

Fans in Russia groove to Allu Arjun’s song from ‘Pushpa: The...