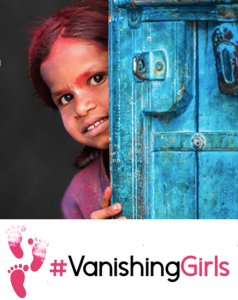 NEW DELHI – ADF International’s partner organization in India has launched a nationwide campaign called #VanishingGirls, addressing the demographic imbalance between men and women in India. It raises awareness of the widely accepted but illegal practice of sex-selective abortions.

“In our country, 50,000 babies are aborted every month for one reason: they are girls instead of boys,” said Tehmina Arora, a representative of ADF India. “India’s skewed sex ratio shows that, as a nation, we have failed girls. They are either aborted or, once born, subject to various forms of violence. It’s time to address this issue, especially on International Women’s Day, March 8. Whoever believes that women share the same rights as men cannot turn a blind eye to what is happening in India today.”

In addition to raising awareness about sex-selective abortion, ADF India’s #VanishingGirls campaign also advocates for a correct implementation of the Pre-Conception Pre-Natal Diagnostics Techniques Act that India adopted in 1994. The law is an important instrument in the fight against sex-selective abortion and could help bring a gradual change to Indian society, in which girls are still heavily discriminated against. Implementation of the act, however, has been poor and sporadic in most parts of the country.

“Girls are vanishing because of a widely prevalent notion that boys are superior,” Arora explained. “We can help bring an end to the terrible practice of sex-selective abortion, and we can improve the way women and girls are treated in our homes and families.”

Indian citizens can sign an online pledge, agreeing to stand up for the rights of India’s vanishing girls. Signatories agree to “honour and respect girls and women” to “ensure that sex-selective abortions are not conducted” and so that women may have an “equal share in the resources” of their families.