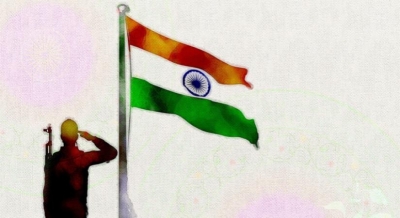 New Delhi– The dictionary defines the word Republic “as a government in which supreme power resides in a body of citizens entitled to vote and is exercised by elected officers and representatives responsible to them and governing according to law.” On India’s 72nd Republic Day we look back at the moments citizens of this country came together against all odds and all adversities, in what was possibly the worst year the world has ever seen.

IANSlife presents a photo series along with inspiring quotes from the Father of the Nation to demonstrate the resilience and the spirit of a nation.

“Strength does not come from physical capacity. It comes from an indomitable will”

A day ahead of the next round of talks with the Union government, thousands of farmers organised a ‘tractor march’, describing the event as a “rehearsal” for a similar roadshow proposed to take place on Republic Day to show their displeasure with three new central farm laws. The Farmer’s Protest has touched a chord with people across the nation.

“In a gentle way you can shake the world”

One of the most enlightened movements to do with India’s democracy and the Constitution was at Shaheen Bagh. It was made all the more special seeing that no leaders were present, no political parties came… just voluntary participation and the strength, determination and resolve of women, who refused to move until their demand for citizenship was heard.

The Delhi Police cleared the 101-day long Shaheen Bagh protest site following the outbreak of Covid-19 and the curfew imposed in the Capital to stop the spread of the deadly virus, on March 24, 2020. The site of the protest was termed as ‘heart of anti-CAA protests in India’.

March 2020 saw the country go into a nationwide lockdown to stop the spread of Covid-19. In the months to follow as the country opened up in phases, and lakhs and lakhs of cases got reported. To treat them, frontline workers which included doctors, nurses, staff and allied medical, civil and police personnel battled fearlessly and tirelessly at the cost of their own lives and the welfare of their families.

As a show of appreciation, pictured here are health workers cheered on and waved at by Indian Navy’s Chetak helicopter as it showers flower petals on INHS Asvini Military Hospital in Mumbai to show honour and gratitude towards the coronavirus warriors who continue to battle the pandemic.

“Seek not greater wealth, but simpler pleasure; not higher fortune, but deeper felicity”

In a year where people across the globe were in lockdown, home sheltering and work from home became the new normal. But with it so did the stress and the pressure of daily life. To bring beauty in this time of darkness it was art which came to the rescue. 2020 saw the world of art and collectibles go online and virtual auctions rallied ahead. The younger demographic stepped in to the serious collectors’ pool and an all access pass was given to many who never dreamt of having one. Auction houses widened their pool by giving access to bidders across countries and cultures. Art was and continues to be recession proof and “virtually” unstoppable.

At a time when the entire nation came to halt it was the common man who came out in support of one another. From volunteers to grocery and delivery boys, the need of the hour was met by those among us. Amid the lockdown, people restlessly worked together to provide safe, hygienic daily essentials to all. (IANS)