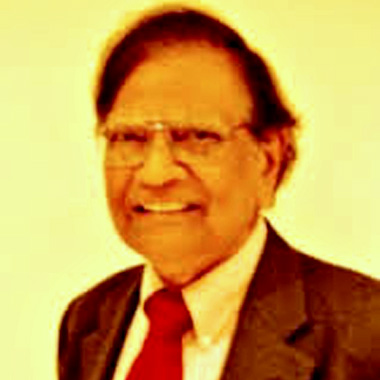 Dr. Mehta was one of the six Indian Americans who were so honored by the President this year.

The Pravasi Bharatiya Sanman Award (PBSA) is the highest honor conferred on overseas Indians. As a part of the Pravasi Bharatiya Divas Conventions organized annually since 2003, PBSA is conferred by the Hon’ble President of India on Non-Resident Indians, Persons of Indian Origin or an organization or institution established and run by the Non-Resident Indians or Persons of Indian Origin in recognition of their outstanding achievements both in India and abroad,.

Dr. Mehta came to America in 1969 to pursue graduate studies in membrane chemistry. After getting his PhD he worked in New Jersey for a few years before moving to Boston in 1978 where he worked as chief research scientist. Dr. Mehta and his wife, Raginiben lived in Needham, MA.

Dr. Mehta has always been motivated in his desire to increase knowledge and awareness of Hindu religion among Indians and Americans. In mid 1970s he was a major force behind the opposition in America to the imposition of emergency in India by Prime Minister Indira Gandhi and the subsequent curtailment of individual rights.

Dr. Mehta was one of the founders of Vishwa Hindu Parishad (VHP) of America dedicated to promoting Hindu values in America. One of the activities of VHP with long term impact, has been to organize youth camps during summer time at various places in America, where children of ages 8-18 would spend a week in a natural park setting and learn about Hindu religion and culture.

Dr. Mehta also was involved in the founding of Hindu Students Council with chapters at various universities in America. He was also one of the founders and Director of the Hindu University of America, based  in Orlando, Florida. He was also the force behind the organizing of New England Hindu Conference in Boston in 1987, to increase the awareness of New Englanders about India and its culture. He has many widely published articles on socio-cultural, socio-economic and socio-political aspects to his fame. ‘Hindu Philosophy in Action’ is the latest from Dr. Mahesh Mehta’s repertoire of books and journals.

I met Maheshbhai at a get to-gather in 1981 and we have been family friends since then. I have been impressed over the years with his knowledge, wisdom and total dedication to the causes he believes in. He was always available for any help in organizing activities or speaking engagements or writing articles for Hindu Vishwa whenever I approached him.

Because of his involvement in the promotion of religious and cultural heritage of India, Dr. Mehta’s home in Needham had become a must visit place for religious leaders and politicians. Former Prime Minister Atal Behari Vajpayee was an annual visitor to their house. Whenever, Swami Chinmayananda, Swami Dayanand Saraswati as well many other swamis and gurus visited Boston, they were always hosted by Maheshbhai and Raginiben. Their house has always been open to visitors from all over the world.

Dr. Mehta is a close friend of Indian Prime Minister Narendra Modi. He was one of the main organizers for the reception of the Prime Minister at the Madison Square Garden in New York in 2014. Now retired, Dr. Mehta spends many months in India each year supporting projects that improve the quality of life of people living in villages near Ahmedabad, India.