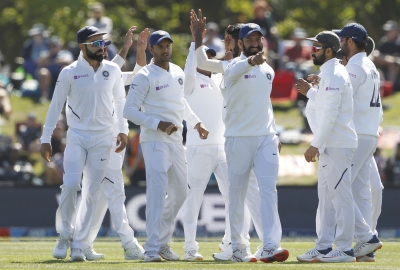 Adelaide– Indian pace bowlers continued their form of the last two years on the second day of the first Test, picking five wickets to leave Australia on the ropes. Speedsters Jasprit Bumrah, Umesh Yadav, and Mohammed Shami, part of the current team, have captured 124 of the 237 wickets that have fallen to Indian bowlers in 14 Tests since December 1, 2018. And if Ishant Sharma, currently recovering from injury, is included the tally for pacers goes up to 165.

The pressure from pacers ensured that the Aussies, known to start in an aggressive way traditionally, did not get a single run off the first 28 deliveries on Friday.

The Indians had struggled to get the ‘lengths right’ early in the day, during Australia’s first 10 overs according to experts, but soon enough found them to leave the Aussies gasping as off-spinner R Ashwin, the best bowler of the second day with 4/55, made use of the pressure to dismiss the batsmen who were looking to force the pace.

India had been using Bumrah, Shami, and Ishant as the spearhead with Umesh in the reserves.

However, with Ishant out of the series due to injury, Umesh was played and he responded with three wickets, two of which came off short-pitched deliveries.

In the calendar year 2018, the Bumrah-Shami-Ishant combine took 136 wickets together, considered a record for a trio, beating the haul of Michael Holding, Malcolm Marshall and Joel Garner (130 wickets in 1984). In fact, 45 of those 136 wickets came in the first three Tests in Australia in 2018.

Ashwin on Friday admitted that in series overseas, pace bowlers are very important and he has to play only the supporting role.

“Sometimes when you are bowling with four bowlers, especially abroad, my job is to hold one end up and (ensure we can) rotate the fast bowlers at the other end,” he said on Friday. (IANS)