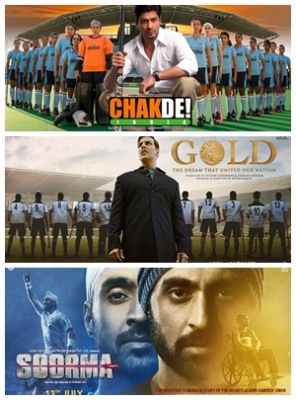 Mumbai–With the Indian men’s hockey team bagging a bronze at the Tokyo Olympics, achieving an Olympic medal in hockey after 41 years, IANS takes a look at popular Hindi films made on this sport in recent times.

While cricket seems to be the most popular choice among filmmakers and very few Hindi films have dealt with hockey as a subject, interestingly top Bollywood stars like Shah Rukh Khan and Akshay Kumar have shown interest in the latter.

Soorma: The 2018 biographical sports drama inspired by the life of Indian hockey player Sandeep Singh, featured Diljit Dosanjh, Taapsee Pannu and Angad Bedi in the lead. The Shaad Ali directorial showcases the inspiring and miraculous journey of hockey player Sandeep Singh who after being accidentally shot, got paralysed and wheelchair-bound and how he made a comeback to international hockey.

After ‘Chak De India’ star Shah Rukh Khan tweeted last week to laud the Indian men’s hockey team for their performance at the Olympics and encourage the Indian women’s hockey team, fans turned nostalgic, recalling his 2007 film and commenting on his tweet, and showered coach ‘Kabir Khan’ with their love.

After young athlete Neeraj Chopra on Saturday made history by becoming the first Indian to win a gold medal in athletics at the Olympic Games, a section of netizens are demanding that his feat in the Javelin competition deserves to be showcased in a biopic too. (IANS)