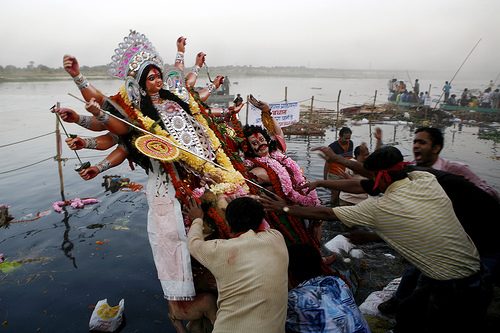 Patna– Several hundred Durga idols were immersed in the Ganga here and elsewhere in Bihar on Dashami — each of them a toxic cocktail of plastics, chemicals and non-biodegradables that will further pollute a river already listed among the world’s 10 big “rivers at risk” by the World Wide Fund for Nature (WWF).

Ahead of the Durga Puja festival, the Bihar State Pollution Control Board (BSPCB) had urged artisans against using plaster of Paris, synthetic colours and non-biodegradable material to make the idols. It also asked devotees to immerse idols after removing decorative and non-biodegradable items.

But to no avail. “People violated all the guidelines, which will certainly increase pollution levels in the river,” a BSPCB official said.

Guddu Baba, who leads a movement to clean the river, is sad that people immerse these brightly-decorated idols with metal ornaments and plastic weapons in the river every year — without giving any thought to the environment.

“The Ganga is a people’s river, it can be protected only by the people themselves,” he said.

Though the BSPCB did make an effort to sensitise people this year, Guddu Baba feels enough has not been done to regulate and check the making of idols a well as their immersion in the river — a clear violation of Central Pollution Control Board (CPCB) guidelines.

“An alternate arrangement should be made for immersing idols,” he stressed, adding that the polluted river poses a grave threat to water bodies at large, to aquatic life and human health as well.

Ranjeev, an expert on rivers and floods, listed the toxic and non-biodegradable elements that go into the making of the idols and how they harm the river. “The idols are made of plastics, fibreglass, plaster of Paris, metals and toxic paints that are not nature-friendly,” he said.

Contrast these toxins in today’s idols to the elements that went into the making of Durga idols in the past: clay, hay and cotton, and natural colours — all biodegradable and harmless, Ranjeev noted.

Research by the CPCB shows that idol immersion during Durga Puja is putting “significant stress” on rivers, lakes and local ponds. Plaster of Paris does not dissolve easily and contains harmful substances such as gypsum, sulphur, phosphorus and magnesium.

Immersion of these idols poisons lakes, rivers and the sea by increasing acidity and the content of heavy metals, killing fish, damaging aquatic plants and blocking the natural flow of water, causing stagnation. Pollution of drinking water sources could mean breathing problems, and blood and skin diseases.

Ranjeev wonders about the lack of will to crack down and curb the malpractices during Durga Puja immersions, especially as there is considerable hype over cleaning the Ganga since Prime Minister Narendra Modi’s National Democratic Alliance government came to power at the Centre.

A report released by the global body World Wide Fund for Nature (WWF) a few years ago had said that the Ganga is among the 10 big rivers in the world facing extinction. The river has also shifted its natural course near Patna. It now flows over two kilometres away from the city, partly due to pollution. (IANS)