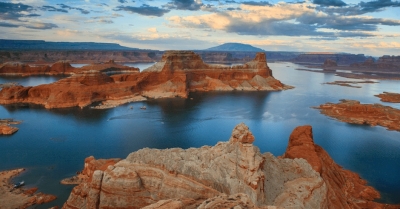 Washington– As water levels continued to drop and historic drought conditions persisted, the US government has declared first-ever restrictions this week on the use of the Colorado River, a vital water source in the country’s southwest.

The water cutbacks to be imposed next year will impact the states of Arizona, Nevada and New Mexico, with California and Colorado potentially not far behind, reports Xinhua news agency.

The Bureau of Reclamation (BOR) officials warned that more restrictions “will likely be necessary in the very near future”.

The declaration will impact some 40 million people who rely on the Colorado River for drinking water and irrigation, and was triggered by continuing declines in water levels at Lake Mead and Lake Powell, which supply water to Southern California, Arizona, Nevada, and New Mexico.

The action, “intended to prevent the need for more severe restrictions”, called for voluntary reduction in usage by residents and was the first “supply alert” in seven years, according to the Los Angeles Times.

MWD’s move was triggered by the BOR news that Lake Mead, the largest man-made reservoir by volume in the US, was at its lowest level since having been built in 1936 and that restrictions would be implemented next year.

Colorado River restrictions were a catalyst for Tuesday’s Water Alert, and also prompted by the small Sierra Nevada snow pack in 2021 and the drought conditions throughout the Southwest, officials said.

The unprecedented federal action, long-anticipated by scientists and on the heels of a bevy of local restrictions already in place, was a bitter blow to farmers who rely on the river for their livelihood.

“This is all going to be cut off,” said Nancy Caywood, pointing at a 100-acre parcel of land that world “turn to dust” due to the cutbacks.

Caywood, whose grandfather bought the southern Arizona farm in the 1930s during the Great Depression, told CNN on Tuesday that her family’s livelihood and future would be in jeopardy with the upcoming restrictions.

It is a massive 185-mile-long man-made lake on the Arizona-Utah border created by the Glen Canyon Dam in 1963.

Lake Powell, the second-largest man-made reservoir in the country, used to store 24-million acre-feet of water, but is currently only 32 percent full, the lowest level ever recorded, BOR officials said.

Agriculture-rich Pinal County, south of Phoenix, capital city of Arizona, would be directly impacted by the water shortage as well, as 65 per cent of its water comes from the Colorado River Basin.

“That will be reduced next year, and potentially the year after that as well,” ABC-News reported.

Historic drought experienced for the majority of the past two decades will not change for some time, Kim Mitchell from Western Resource Advocates told ABC.

Mitchell told the media that “we need to learn to adapt to changing conditions by reducing our demand”, words that ring hollow to many Arizona farmers like Caywood, whose farms faced a barren future.

Agriculture in Arizona contributes more than $23.3 billion to the state’s economy and employs 162,000 workers, according to agriculture.az.gov.

On June 1, Syracuse City of the state adopted water restrictions and began enforcement, and officials said last week that “conditions have been improved”, with water usage decreasing and storage increasing.

The five driest states are Nevada, Utah, Wyoming, Arizona and New Mexico, with Colorado numbered the seventh and California is the most extreme in summertime, according to currentresults.com.

The Colorado River is the fifth longest river in North America, and arguably the aorta of life through US arid southwest, flowing 2,330 km from Colorado through Utah, Arizona, Nevada and Southern California, and ultimately runs into the Gulf of Mexico, according to World Atlas. (IANS)