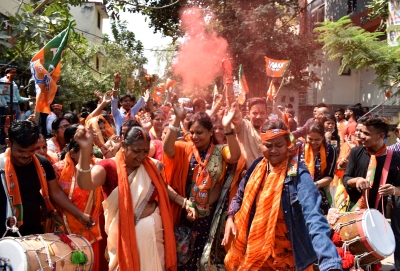 New Delhi–As BJP storms to power in Uttar Pradesh for the second time in a row, breaking a three decade old taboo, it may be due to the fundamental shift in the state politics — the consolidation of Hindutva votes behind Prime Minister Narendra Modi since 2014.

The state voters have been solidly behind the BJP — first in the 2014 Lok Sabha elections, then in the 2017 Assembly elections, the 2019 parliamentary elections and now again in the 2022 Assembly polls. Despite all the votes the BJP has been able to get, it may be due to the Hindutva factor, however laced with social schemes of ration distribution during pandemic and the direct cash transfers to the farmers.

The March 10 results have proved again the new political culture in the state as the BJP has won 254 seats with more than 41 per cent popular votes, 10 per cent more than the nearest rival, the Samajwadi Party.

The Hindutva tone was set by Chief Minister Yogi Adityanath when he said the BJP does not need the 20 per cent votes, in what was seen as a reference to the minority community votes and that the party is happy with 80 per cent, triggering political reactions. The BJP’s tone for elections was set about 80 vs 20 and the speakers in the public meetings repeatedly talked and targeted the 20 per cent.

But it was the Prime Minister who held the Hindutva fort starting from 2014. Riding on the Hindutva wave after Muzaffarnagar riots, BJP stormed to power winning 71 Lok Sabha seats in Uttar Pradesh garnering a staggering 42.6 per cent votes, while in the previous election, the party could manage to win only 10.