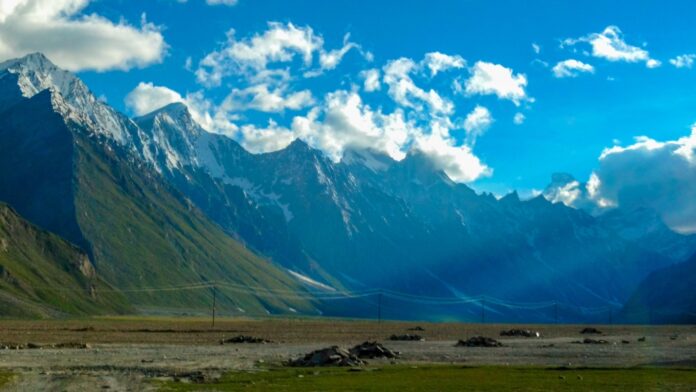 New Delhi– Two recent studies have thrown more light on the condition of the glaciers across Himalayas and also those from the Trans-Himalayan region of Ladakh. Although the thinning, melting, and receding of glaciers have been known for quite some time now, every new study comes as an alarm for humanity.

In their latest published study, a bunch of researchers have studied the Pangong Tso region of Ladakh and ascertained the area changes and frontal retreat of 87 glaciers between 1990 and 2019 using satellite data. Besides, the glacier outlines were delineated manually and compared with existing regional and global glacier inventories that are available over the region.

This analysis indicated deglaciation of 6.7 per cent from 1990 to 2019 over the Pangong Region with clean-ice glaciers showing a higher retreat of 8.4 per cent compared to the debris-covered glaciers’ 5.7 per cent. However, the overall recession is lower compared to other parts of north-western Himalayas, the study published in the study titled ‘Spatiotemporal dynamics and geodetic of glaciers with varying debris cover in the Pangong region of Trans-Himalayan Ladakh India between 1990 and 2019’, published in Frontiers in Earth Science journal in December 2021, said.

From 2000 to 2012, the glaciers lost an ice mass amounting to 0.33 to 0.05 metre water equivalent (m we) per year. The only thing is that the mean glacier elevation did not indicate any influence on glacier recession.

Unlike this, another study published last week found out that glaciers on Mount Everest such as South Col Glacier, which is located at the highest point in the world, have been thinning at an alarming rate, with estimated thinning rates of nearly two metre per year.

The study published in the Nature Portfolio journal ‘Climate and Atmospheric Research’, as reported by IANS, addresses a key question from the 2019 National Geographic and Rolex Perpetual Planet Everest Expedition on whether glaciers at the highest point on earth are experiencing the impacts of climate change. And the Mount Everest region has indeed been losing ice significantly since the late 1990s, it was revealed.

So do we know everything about Himalayan glaciers?

It has been known for quite some time that the Himalayan glaciers are showing recession due to multiple reasons, including climate change. Even the government is aware of and maintains data regarding melting of Himalayan glaciers.

It is also known that the glaciers in eastern, central, and western parts of the Himalayas are reacting differently to different causes such as climatic conditions, topography, and geological influences. The Western part also includes the Karakoram ranges and the Trans-Himalayan Ladakh region, which is supposed to be relatively stable compared to the rapidly changing eastern or central parts.

The Himalayas are called the third pole as it is the repository of the highest volume of ice outside the two poles. As many as 10 major rivers of the Indian sub-continent originate from the Himalayas and India’s 45 per cent population is directly or indirectly dependent on Himalayas.

Melting glaciers have significant impact on water resources of Himalayan rivers due to change in glacier basin hydrology, downstream water budget, impact on hydropower plants due to variation in discharge, flash flood and sedimentation. They also increase in risk related to glacier hazards due to enhanced number and volume of glacier lakes, accelerated flash flood and Glacial Lake Outburst Floods (GLOFs), impact on agro practices in high Himalayan region etc.

Multiple government agencies have been studying the glaciers albeit the effort is far too less given the vast number of glaciers – 10-15,000 known large glaciers and numerous smaller ones – spread across the Himalayas with most of them difficult to reach.

In the just concluded Budget Session of the Parliament, Lok Sabha member Dushyant Singh had asked if the government is aware of the study conducted by the University of Leeds, regarding the rapid melting of Himalayan glaciers, published in journal Nature Scientific Reports in 2021.

The government agreed that it was aware of it and pointed out the difference between the findings of the multiple studies. The University of Leeds, the Minister for Earth Sciences, Dr Jitendra Singh answered, had reconstructed the size and ice surfaces of 14,798 Himalayan glaciers during the Little Ice Age, which was 400-700 years ago.

The study concludes that the Himalayan glaciers have lost ice 10 times more quickly over the last few decades than on average since the last major glacier expansion. In the last 400 to 700 years, the glaciers have lost around 40 per cent area – shrinking from 28,000 sq kms to around 19,600 sq km.

The Minister also listed the various Indian institutes/universities/organisations such as Geological Survey of India, the Wadia Institute of Himalayan Geology, the National Centre for Polar and Ocean Research, the National Institute of Hydrology, the Space Application Centre, the Indian Institute of Science (IISc) etc. that monitor Himalayan glaciers for various scientific studies including glacier melting.

These studies have reported accelerated heterogeneous mass loss in Himalayan glaciers. The mean retreat rate of Himalayan glaciers is in the range of 14.9 to 15.1 metre/annum (m/a); which varies from 12.7 to 13.2 m/a in Indus, 15.5 to 14.4 m/a in Ganga and 20.2 to 19.7 m/a in Brahmaputra river basins. However, glaciers in the Karakoram region have shown comparatively minor length change (from minus 1.37 to 22.8 m/a), indicating the stable condition.

The GSI has taken up a project on melting of glaciers in Beas Basin, South Chenab basin and Chandra Basin in Himachal Pradesh, Shyok and Nubra basin in Ladakh during Field Season 2021-22.

The NIH has been conducting several studies for the assessment of runoff from melting of glaciers at catchment and basin scales across Himalayas. “The recent publication suggests that at regional scale, mass loss rate varies between minus 0.41 to 0.11 m.w.e.y-1 in the eastern; minus 0.58 to 0.01 m.w.e.y-1 in the central; minus 0.55 to 0.37 m.w.e.y-1 in the western Himalaya and minus 0.10 to 0.07 m.w.e.y-1 in Karakoram region in the last decade, the Lok Sabha was told. (IANS)