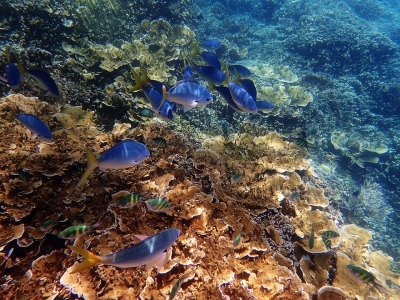 Canberra– Large sections of Australia’s Great Barrier Reef (GBR) now have an unprecedented amount of coral, according to a new report published on Thursday.

The Australian Institute of Marine Science’s (AIMS) annual report found that the northern and central regions of the 2,300 km ecosystem have the most coral since the surveys began 36 years ago, reports Xinhua news agency.

Coverage in the GBR’s southern region, however, decreased during the past 12 months due largely to an ongoing outbreak of crown-of-thorns starfish which feed on coral.

Aside from predators such as the starfish, the GBR has been hit hard in the past seven years by four mass bleachings which were caused by the millions of tiny coral polyps reacting to changing environmental conditions such as rising water temperatures.

The result is the vibrantly coloured colonies turn stark white.

The report found that this year’s bleaching was not as extreme as previous ones, but it did occur during a La Nina year, which is a climate phase that usually gives corals a respite.

AIMS Chief Executive Paul Hardisty, in an article published online in Scimex on Thursday, said the mixed results indicated that although the GBR could recover, it remained vulnerable due to the “continued acute and severe disturbances that are occurring more often, and are longer-lasting”.

“Every summer the reef is at risk of temperature stress, bleaching and potentially mortality and our understanding of how the ecosystem responds to that is still developing,” Hardisty said.

The report also noted that much of the new growth was the fast-growing Acropora corals.

This means that large increases in hard coral cover can quickly be negated by disturbances on reefs where Acropora corals predominate, he said.

The increasing frequency of warming ocean temperatures and the extent of mass bleaching events highlight the critical threat climate change poses to all reefs, particularly while crown-of-thorns starfish outbreaks and tropical cyclones are also occurring, he added.

“Future disturbance can reverse the observed recovery in a short amount of time.”