New Delhi– External Affairs Minister Sushma Swaraj, known for coming to the rescue of Indians in distress abroad, on Wednesday said that she feels strongly for the welfare of Indian workers abroad.

She said this during a meeting with United Arab Emirates’s Minister of State for Foreign Affairs Anwar Gargash here. 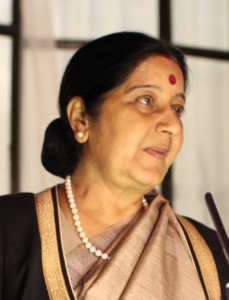 “I strongly feel for the welfare of our workers who are abroad,” External Affairs Ministry spokesperson Raveesh Kumar, in a tweet, quoted Sushma Swaraj as saying during the meeting.

Sushma Swaraj also discussed ways and means to ensure welfare of the Indian workers in the UAE, he added.

There are over 2.6 million expatriate Indians in the UAE, most of whom are blue collar workers in the country’s infrastructure sector. Most of them are from the south Indian state of Kerala.

Prime Minister Narendra Modi visited the UAE in August 2015, the first prime ministerial visit to the Gulf nation in 34 years since the visit of then Prime Minister Indira Gandhi in 1981, and described the UAE as a most valued partner and a close friend of India. (IANS)