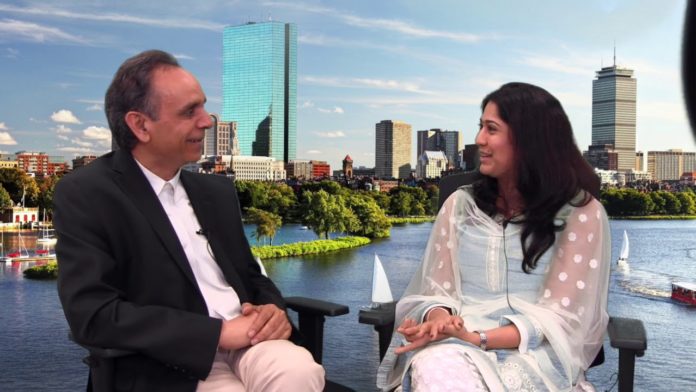 BOSTON—She is a C-Level executive at the nation’s oldest mutual fund company, MFS Investment Management. Currently, she serves as president of the India Association of Greater Boston, one of the oldest and largest community organizations in New England. Previously, she headed New England Marathi Mandal.

In addition, Aditi Taylor is a great actress, superb dancer and a theater enthusiast. She has been recognized as inclusive leader to watch for and was inducted into the 2009 Boston Business Journal’s “40 under 40” list and 2015 Greater Boston Chamber of Commerce’s “Ten Outstanding Young Leaders” class. She has been named 20 Outstanding Women by INDIA New England News.

In an exclusive video interview with Face-to-Face With Upendra Mishra, Ms. Taylor talks about the two people who inspire her the most to do everything thing she does in her life: her mother, Dr. Vidya Bhide, MD, who gave her life; and her husband, Vishal Taylor, who gave meaning to her life.

Ms. Taylor is an ardent follower and performer of theater. Since the early age of 4, she has been performing on stage. A multi-lingual artist (she speaks over 6 languages), she has directed and acted in several theater productions in many languages, often times including up to 70 performers of all ages. A few notable performances include ‘Utsav Dindi’, ‘Durga Zali Gauri’, ‘Khara Sangaycha Tar’ (all in Marathi), ‘Tartuffe’ (French), ‘Sach Aur Sach Ke Siwa (Hindi)’, ‘Ramayan – by SETU’ and ‘Kamala – by SETU’ (English).