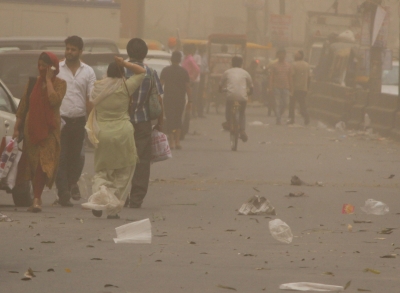 New Delhi/Mumbai– For three days in a row, Mumbai has been witnessing very high pollution levels – with Air Quality Index readings mostly above 300, almost matching Delhi’s – with some places recording an AQI of even 400 plus.

And if the experts are to be believed, the two back-to-back dust storms induced worst air quality may continue to be so for two more days. That is, if Mumbai and western coast are not hit by a third.

Since Sunday, Mumbai’s AQI has hovered above 300 (‘very poor’ as per meteorological classification in India) with even Tuesday morning recording 320, the Ministry of Earth Science’s System of Air Quality and Weather Forecasting Research (SAFAR) forecast and advisory said.

But it is not just Mumbai. The western part of India – parts of coastal Maharashtra north of Mumbai, large parts of Gujarat including capital Gandhinagar and Ahmedabad, have been experiencing a peculiar air quality this winter.

“It is very unusual. During the last 15 days, there has been a second successive dust storm, which originated in the border areas of Rajasthan, Pakistan and some even to the extent of Afghanistan. It coincided with the Western Disturbances, so an upper air trough was formed. That elevated system entered somewhere near Ahmedabad,” said SAFAR founder Director Gufran Beig.

The air quality in Mumbai and Ahmedabad, which normally remains moderate or average in this season, continued to remain very poor till Monday because of calm wind conditions and colder/lesser temperatures, he said.

“Although the second dust storm related intrusion stopped three days ago, due to moist conditions and relatively cooler temperature in Mumbai, fine particles which were trapped due to the storm, are hanging and not being dispersed as air is still heavy,” Beig said explaining why Mumbai’s AQI is still very poor. “It will steadily but slowly start to improve as it gets warmer in coming days.”

But there is a rider. “This will happen in two days provided a third dust cluster does not get formed from the Thar desert, as that area is now heating up even when north and east India are again going to be under the influence of Westerly Disturbances leading to cooling-off followed by rains in Delhi,” he warned.

If that happens, local Mumbai wind speed may increase and likely sweep dust away faster, he said.

This phenomenon, however, has alarmed the scientific fraternity.

“We have started looking into the cause of these successive wind and dust storms coming from the West when the air is very heavy here as we suspect that this may be an impact of climate change. It cannot be denied that there are some unusual activities happening, and all over the world scientists have started looking into this and we have started too,” the scientist said, adding, “Of course, there is a lot of micro-level work in air quality modelling, and path-way analysis needs to be done. But we cannot deny the role of climate change.” (IANS)