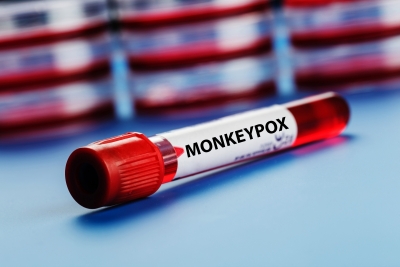 New Delhi– Monkeypox virus, that has crossed over 16,000 cases worldwide, is now a declared public health emergency of international concern like Covid and polio.

Four cases of the infectious disease have also been confirmed in India, including New Delhi.

Monkeypox is a rare viral disease, related to smallpox and cowpox. The virus generally causes pimples or blister-like lesions and flu-like symptoms such as fever.

The lesions typically concentrate on the arms and legs, but in the latest outbreak, they’re showing up more frequently on the genital and perianal area.

It is transmitted from infected animals to humans via indirect or direct contact.

Human-to-human transmission can occur through direct contact with infectious skin or lesions, including face-to-face, skin-to-skin, and respiratory droplets.

Transmission can also occur from contaminated materials such as linens, bedding, electronics and clothing that have infectious skin particles.

Touching objects that have been contaminated by monkeypox lesions or fluids may also increase the risk of spreading.

“We should all know about the transmission root of this virus. It spreads by close contact, skin to skin contact and droplet infection. So, we have to be careful about all these factors,” Dr Satish Koul, Director of Internal Medicine at Fortis Memorial Research Institute, said.

The disease has also been reported among three children — two in the US and one in the Netherlands.

Monkeypox, even though is not a sexually transmitted disease, in the latest outbreak, it has mostly been spreading among men who have sex with men, according to Centers for Disease Control (CDC) Director Dr. Rochelle Walensky.

“We do have seen now two cases that have occurred in children. Both of those children are traced back to individuals who come from the men who have sex with men community, the gay men community,” Walensky was quoted as saying in an interview with the Washington Post.

Monkeypox is usually considered mild and most people recover within four weeks without treatment.

However, the disease is frequently uncomfortable or painful, and can sometimes lead to complications that require close medical follow-up.

If one has “fever after travelling recently, or you have come in contact with somebody who has manifested symptoms of monkeypox, you should immediately seek consultations from your physician. As of now, prevention is the cure,” Koul said.

The primary measures to control the outbreak are contact tracing and isolation.

It is also important that people confirmed with monkeypox disclose their contacts so they can be alerted to monitor for symptoms.