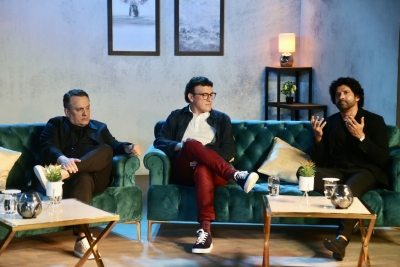 Mumbai– Farhan Akhtar has said that while working in the superhero OTT series ‘Ms. Marvel’ was an amazing experience for him and people enjoy superhero movies, but Hindi film heroes have been doing what superheroes do — that too a long time.

“Our heroes have been beating up an array of bad guys and sending them flying in the air since time immemorial,” pointed out Farhan, who is well-known for cult hits such as ‘Dil Chaahta Hai’, ‘Lakshya’ and ‘Don’, and now for web series.

Farhand was speaking during a conversation with The Russo Brothers, who were in Mumbai to promote their action film for Netflix, ‘The Gray Man’.

Bollywood has taken a beating of late as it faces stiff competition at the box office from superhero films and content coming from South India. Farhan, who also runs the production company Excel Entertainment with Ritesh Sidhwani, said that while Hindi films may not have big budgets to compete with content from Hollywood, the industry as a whole needs to pull up its socks.

“We as India’s film fraternity may not have huge spending power on VFX or budgets like the films in the west, but we need to up our game as the audience now has access to content from all over the world,” tje actor-director-producer concluded. (IANS)