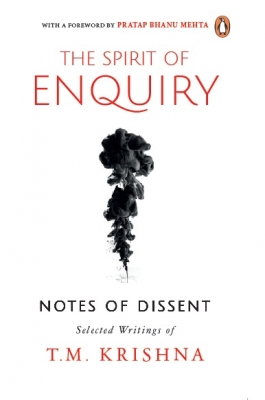 New Delhi– Karnatic maestro T.M. Krishna has worn many a hat during his 45-year career as a vocalist who has made innumerable innovations in the style and substance of his concerts and as a writer-activist-author.

A Magsaysay Award winner “for his forceful commitment as artist and advocate to art’s power to heal India’s deep social divisions”, he has now curated his writings into an extraordinary collection titled “The Spirit of Enquiry”, thematically divided into five key sections – art and artistes, the nation state, the theatre of secularism, savage inequalities and in memoriam.

“To enquire, is to pause and think deeply about matters. It involves meditating with utmost honesty, without allowing our own conditionings to cloud reality. We are not always successful in doing that, but being aware of what enquiry truly is, is in itself a self-checking mechanism.

“Enquiry is not only an internal process; it involves receiving with openness and allowing an interaction between the inner and the outer. Enquiry is not solution finding, it is about asking sincere questions,” Krishna told IANS in an interview of the book, which has been published by Penguin.

“The book was brought together to enable conversations on various essential socio-cultural-political issues. We selected pieces and curated them in a manner that allowed the reader a deeper understanding of my reflections, changes in my own thought process and to nudge the reader into further rumination. These essays are categorized under themes that have drawn attention ever so often,” added Krishna, who, in 2017 received the Indira Gandhi Award for National Integration.

The book reflects his searingly outspokenness about issues affecting the human condition. He is at once philosophical, aesthetic and socio-political and asks important questions about how art is made, performed and disseminated.

Speaking about this aspect, he said: “Without going into the specifics, over the past decade I have changed the way Karnatik music is performed, its content, challenged its overt hegemonic religiosity and inbuilt casteism, looked to create a more welcoming environment, moving the performance of the art beyond its known Brahmanical clusters, providing platforms for artists who are neglected and tried to make the artform respond to larger society and life.

“I have also been privileged to learn from artists from so many other streams of art like (author) Perumal Murugan, the Jogappas (transgender community), P. Rajagopalan (Kattaikuttu artist), Deepan (Parai artist) and many others. My efforts have been to create an environment for vibrant aesthetic conversations and learnings on life and society without brushing under the carpet its ugly realities,” Krishna elaborated.
?
Flowing from this, how does he regard the state of classical music in India today? Is enough being done to promote it, are adequate numbers of youngsters being attracted to the genre, et al??

“The term ‘classical’ is a misnomer and only signifies socio-cultural privilege. The problem with the art forms that place themselves under this head is not the number of people, because these art forms will always be niche and hence cannot expect numerical parity with cinema music.

“What needs to change is the social demography of the people who participate in these art forms as artists and audience members. Unfortunately, the so-called classical world does not seem to care about this and continues to propagate falsities about its mystical and special nature,” Krishna maintained.

He is also working on a project in which the compositions of Tamil poet, singer and Veena player Muthusvami Dikshithar (1775-1835) are rendered exactly according to their notation in book titled “Sangeetha Sampradaya Pradarshini”.

“The “Sangeetha Sampradaya Pradarshini” was authored by Subbarama Dikshitar in 1904. This treatise documents the history and practice of Karnatik music in the preceding 200 plus years. In this publication there are 221 compositions of Muthusvami Dikshitar, all notated using descriptive notation that tries to accurately present the movement of every note.

“In this project, R.K. Shriramkumar (violinist and scholar) and I, with the guidance of Dr R S Jayalakshmi and Dr N Ramanathan (both Musicologists) have tried to archive Muthusvami Dikshitar compositions as per the notations published. We have documented about 40 compositions. The project has slowed down over the past few years because of my other preoccupations, but I do hope to pick it up in earnest after the pandemic,” Krishna explained.

It doesn’t stop there. Such is the depth of Krishna’s involvement with promoting Karnatic music that he is also associated with the Urur-Olcott Kuppam Festival and the Svanubhava initiative in Chennai.

“Chennai Kalai Theru Vizha, previously known as Urur Olcott Kuppam Vizha, is a volunteer and community driven effort. Music, theatre and the arts are meant to be bridges connecting cultures, civilizations and other artificial boundaries that divide people. But often they fall prey to the same divisions created by man,” he said.

Chennai Kalai Theru Vizha was conceived to “heal art, and help art heal by introducing art and artists to new audiences and different environments. As art gets more and more esoteric, with artists and the audience seeking comfort in the homogeneity of class, caste, race or creed, it begins to lose its ability to communicate and build bridges across the vast and wondrous diversity of people and places. The art and the artists stop growing. Providing varied experiences for people who engage in arts is important and we feel that this community effort does it beautifully,” Krishna added.

The objective of Svanubhava, he said, “is to create inter-art conversations between artists and young audiences both in urban and rural areas. In over a decade, we have presented over a hundred art forms across the various editions in Chennai, Delhi, Bangalore, Anaikatti, Trichy, Tirunelveli and Jaffna”.

Through the Svanubhava initiative, “thousands of students and young adults have been introduced to various forms of art and this has led to increased appreciation of these art forms. Over 300 plus artists have been engaged in the Svanubhava initiative. We have also introduced a small programme to enable art classes in the villages on the Tamil Nadu and Kerala border, in and around the little town of Anaikatti,” concluded Krishna, who in 2017 received the Professor V Aravindakshan Memorial Award for connecting Karnatik music with the common man.

He has co-authored “Voices Within Carnatic Music” dedicated to the greats of the genre, while his path-breaking book, “A Southern Music: The Karnatik Story” won the 2014 Tata Literature Award for Best First Book in the non-fiction category. His long-form essay, “MS Understood for the Caravan” was featured in The Caravan Book of Profiles. He is also the author of “Sebastian and Sons: A Brief History of Mrdangam Makers” which received the 2020 Tata Literature Live! Book of the Year Award in the non-fiction category. (IANS)