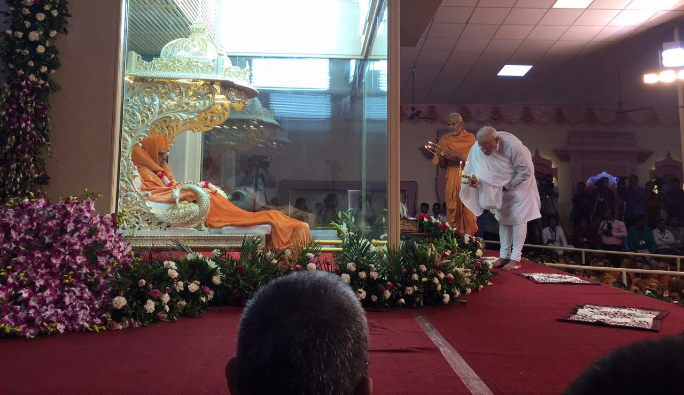 Pramukh Swami enjoyed a massive following around the world. He passed away on Saturday evening.

Watched by thousands, Modi said that while people may have lost a guru, he had lost a father. 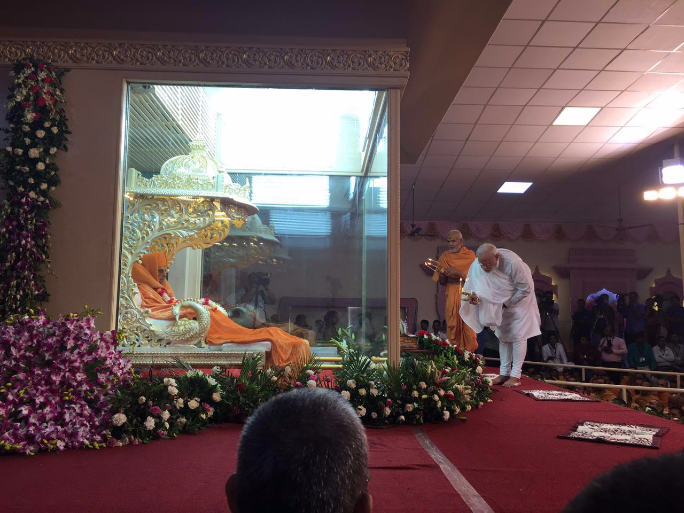 The Prime Minister flew to Gujarat after addressing the Independence Day function at the Red Fort in Delhi.

From Ahmedabad, Modi flew by helicopter to Sarangpur in Botad where Pramukh Swami’s body had been kept for his followers to have their last ‘darshan’.

Modi spent about an hour in Sarangpur after which he would return to Delhi. The place crawled with thousands of devotees who had reached there in hundreds of buses and other vehicles.

Modi said Pramukh Swami fulfilled his guru Yogiji Maharaj’s wishes by developing the Akshardham temple on the bank of the Yamuna in the Indian capital.

Sharing his memories, the Prime Minister said that when the Akshardham temple in Delhi was to be inaugurated, Pramukh Swami insisted that he must join the consecration ceremony. Modi was then the Gujarat Chief Minister.

“Though there were many important people there, Swamiji not only wanted me to sit in the ‘puja’ but he gave some money to me so that I would also contribute in the form of donation.

“He knew I didn’t have anything in my pocket,” he added.

All the major highways leading to the venue in the Saurashtra region were choc-o-bloc.

The Prime Minister described the Pramukh Swami as his mentor. As Chief Minister of Gujarat, Modi was a frequent visitor to Pramukh Swami.