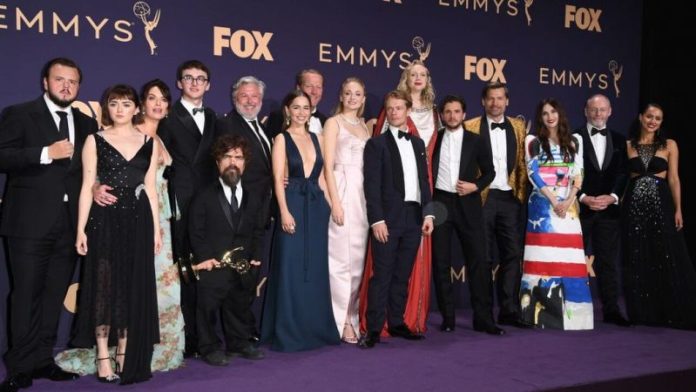 Los Angeles–The 2019 Emmy awards was about wrapping up old affairs with the fantasy sensation “Game of Thrones” saying final goodbyes, creating histories, starting new flings with surprise winners like “Fleabag” and “Ozark”, and sparking conversation for change in Hollywood.

The final season “Game of Thrones”, which broke records by earning 32 nominations, took home 12 trophies, including Best Drama series and Best Supporting Actor for Peter Dinklage for the role of Tyrion Lannister.

“These last 10 years have been the best years of our lives and for everyone who worked on it, I can’t believe we finished — and I can’t believe we did it. We did it all together and it’s over and we shall never see your like again,” co-creator David Benioff said in a fitting farewell note.

Dinklage, who created Emmy Awards history after winning Outstanding Supporting Actor in a Drama Series for the fourth time, got emotional when he got on stage to accept final Emmy for the show.

“I count myself so fortunate to be a member of a community that is all about tolerance and diversity, because no other place could I be standing on a stage like this,” said the actor, who was born with dwarfism.

The “Game of Thrones” cast, including Kit Harington, Lena Headey, Emilia Clarke, Dinklage, Sophie Turner and Maisie Williams, also got a standing ovation when they got on the stage to say goodbye.

“As much was we wish the show could have gone on forever. Our time had come. And tonight is a chance to once again thank all of those who watched,” Williams said.

Borstein dedicated her Emmy to the women of the show, grandparents, immigrants, Holocaust survivors and asked women to “So step out of line, ladies”.

Phoebe Waller-Bridge’s “Fleabag” was a surprise package as the show dominated the comedy categories, sweeping in honours for best comedy, best directing and best writing for a comedy series.

“Huge thank you for ‘Fleabag’ family. Everybody who has put so much heart in it. It’s really wonderful to know a dirty, pervy, angry messed-up woman can make it to the Emmys,” said Waller-Bridge.

There were many historical moments in the show.

“Pose” star Billy Porter created history by being the first openly gay black man to win the trophy in the Lead Actor in a Drama category. “When They See Us” star Jharrel Jerome became the youngest person to win an Emmy in Lead Actor in a Limited Series or Movie category, and the first Afro-Latino to win for acting in the series.

“The category is love. I am so overwhelmed and I am so overjoyed to have lived long enough to see this day,” Porter said on the stage.

Apart from the glitz and glamour, the ceremony was full of powerful moments with actress Patricia Arquette demanding for equal rights for transgender people while accepting the award in Supporting Actress in a Limited Series or Movie category, and Michelle Williams making a passionate plea for pay equality.

“The next time a woman, especially a woman of colour, tells you what she needs in order to do her job, listen to her, believe her, because one day she might stand in front of you and say thank you for allowing her to succeed because of her workplace environment and not in spite of it,” said Williams, who won Best Lead Actress in a Limited Series or Movie for “Fosse/Verdon”.

Jason Bateman also won an Emmy in Directing for a Drama Series category for “Ozark”.

Actor Ben Whishaw won his first Emmy in Supporting Actor in a Limited Series or Movie category for “A Very English Scandal”. Jesse Armstrong won the award in the Outstanding Writing for a Drama Series category for “Succession”.

The 71st Primetime Emmy Awards, which was supposed to be held without any host, started on Sunday night here by introducing Homer Simpson as the host of the show. Just as the animated character got onto the stage, an animated piano fell from the ceiling and crushed him. That’s when actor Anthony Anderson took it upon himself to “save the Emmys”. He raced to the stage, took a dig at the cup fiasco of “Game of Thrones”, pretended to steal the Emmys and pushed Bryan Cranston onto the stage, who spoke about the importance of television.

Late icons including Stan Lee, Luke Perry and Valerie Harper were also honoured at the gala with a moving tribute in the “In Memoriam” segment. (IANS)