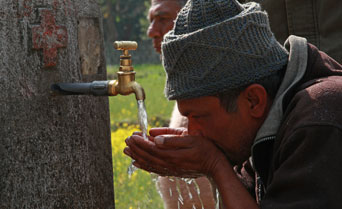 Prague– A team of scientists from the Technical University in Prague have said they found a method of extracting water from air using an autonomous solar-powered system.

The first prototype of Solar Air Water Earth Resource (SAWER) has the capacity to produce 100 litres of drinking water per day anywhere on the planet, even in the desert.

The experts installed SAWER in the United Arab Emirates’ town of Sweihan, located about 70 km east of Abu Dhabi.

“It is not a revolutionary process, but an unusual one,” civil and environmental engineering professor Tomas Matuska told Efe news, adding it used dehumidifiers that are often employed in the food industry.

Matuska explained that the two-stage system consists of a desiccant that holds water molecules in its surface and then an air heater produces water vapour to be taken back to the surface.

A group of 12 scientists started the project in the Czech Republic’s capital in 2017 and created the first prototype that can be transported in two six-meter-long cargo containers.

One of the containers holds the production unit including distilled water equipment, while the second contains the accumulators to boost heat and cold processes, as well as energy control systems.

Photovoltaic modules are placed on the two containers in order to produce the energy necessary to start the process.

“The test (near Abi Dhabi) will last about six months, because we want to have information with data from summer, autumn and winter,” said Matuska, who is part of the team that developed SAWER in Prague.

The device will be tested in the laboratory during this period, although Matuska said it only requires “air filter changes, water canister emptying and cleaning for the photovoltaic modules.”

“There is a great interest in our project, from the US to Australia,” Matuska said, adding: “We have signed a confidentiality agreement with a company with businesses in the Persian Gulf area.” (IANS)