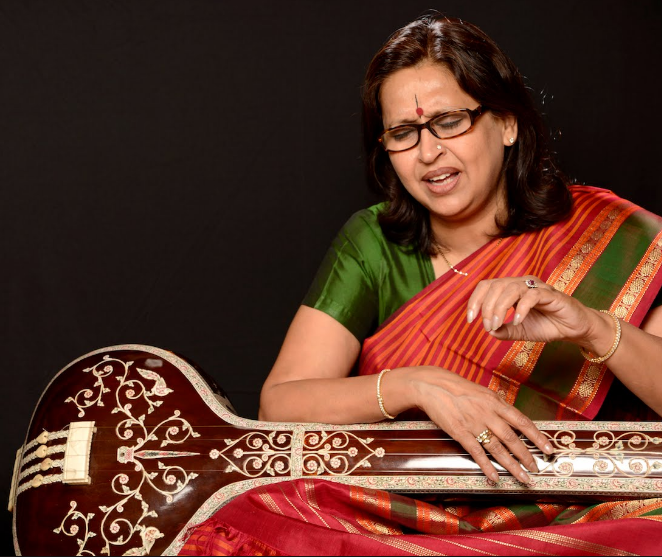 WALTHAM, MA—She learned singing from some of India’s best vocalists. She became a great singer in her own right—winning two national awards and recognized as one of the top vocalists of her generation in India.

Today, learning and teaching have become an integral part of Arati Ankalikar-Tikekar. As she has mellowed and perfected her own singing, she has also become a great teacher. She uses teaching techniques she learned from her parents, her teachers and her own students to instill a sense and pride of Indian music.

A few months ago, Ms. Ankalikar gave a private performance at the home of one of her students, Anuradha Palakurthi, in Weston, MA. This was the first time some of us had the opportunity to listen to her live.

We were impressed by her singing and ease of explaining classical ragas, and invited her to our studio to talk about Indian classical and semi-classical music, kajari, thumari, chaiti and jhula, among other things. What are the key qualities of a good student? Why is a teacher important? Why does practice really make one perfect, especially in music? What is that one thing the Indian classical music offers that no other tradition does?

In a video interview with INDIA New England News, Ms. Ankalikar talks not only about the issues mentioned above but also illustrates—like a seasoned teacher—her points with specific examples. To watch the full interview, please click here.

“If you are gifted; if you have a good voice, the journey becomes easier,” says Ms. Ankalikar, adding that the guru becomes important in the sense that he or she has to tell the student that they have to learn instrumental—if their voice is not good.

When learning music, voice and the ability to modulate the voice are great gifts, but don’t underestimate the power of practice, adds Ms. Ankalikar.

“Arati-Ji is one of the most accomplished artists of Hindustani classical music and probably one of the three best singers in India,” said her student Ms. Palakurthi. “What makes her a fantastic guru is that she can tune her knowledge into content and style to fit students of varying capacities – with equal and tremendous rigor.”

Ms. Palakurthi said that it is her privilege to count Ms. Ankalikar as her guru, and an honor that she considers her a friend.

“I am fortunate to learn both – very technical nuances of ragas and popular Bollywood music,” said Ms. Palakurthi. “She has brought professional music as a third dimension of joy to our lives – the first two of which are family/friends and occupation/business.”

In addition to classical and semi-classical, Ms. Ankalikar has sung for Bollywood and Marathi movies. She awarded National Award for Best Female Playback Singer for the Konkani film Anternaad. Other awards bestowed upon her include Maharashtra State Award for best playback singer, V.Shantaram Award and Maharashtra Times Award for a Marathi Film De Dhakka (2008).

Badshah narrates a story through his latest: ‘Woh’