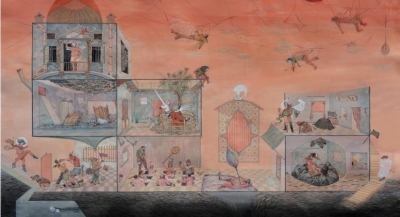 New Delhi– India Art Fair, taking place from February 3-6, 2022 in partnership with BMW India, will present 75 exhibitors across 14 cities, including an unprecedented 13 non-profit foundations and institutions. Through an open call led in collaboration with The Gujral Foundation and Artdemic, Anshuka Mahapatra has been selected to design the tent facade of the 2022 fair.

Helmed by Jaya Asokan for the first time since her appointment in April 2021, this edition of the fair is a testament to the resilience of the Indian and South Asian art market and the art community at large. The fair spotlights the next generation of artists alongside modern masters through initiatives including Auditorium talks, performances, film screenings, outdoor art projects, artist-led workshops, and an online symposium in the run up to the fair. Continuing the fair’s enduring relationship with the region’s pioneering institutions, the forthcoming edition will see participation from Kochi Biennale Foundation, Chennai Photo Biennale and Serendipity Arts Foundation, among others.

Extending its role beyond that of an annual event, India Art Fair is making greater inroads into the local and international art scene by expanding its digital presence through website editorial and films, a range of online talks, workshops and exhibition walkthroughs, as well as the IAF Parallel programme including events and exhibitions of Indian and South Asian art taking place in cities across India and the world.

Jaya Asokan, Fair Director of India Art Fair, commented: “The team and I are thrilled for India Art Fair to return in its physical format, and to celebrate with the artists, galleries and partners who have taken the region’s arts scene from strength to strength. With an unwavering commitment to its home base, the 2022 fair will welcome participants that extend beyond the traditional art hubs of New Delhi and Mumbai, such as Kolkata, Pune, Bengaluru, Chennai and Ahmedabad.” (IANS)