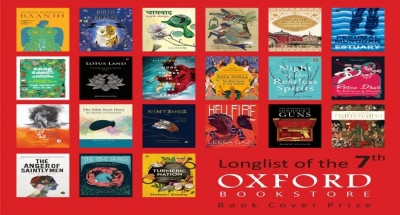 Maina Bhagat, Director, Apeejay Kolkata Literary Festival, offered a sneak peek into the three-day literary extravaganza at the AKLF Curtain Raiser held at ‘The Park’ New Delhi, followed by the announcement of the Longlist of the seventh edition of Oxford Bookstore Book Cover Prize.

The Festival will host more than fifty national and international delegates from diverse backgrounds ranging from authors, poets, screenplay writers, thinkers, sportspersons, journalists and Bollywood actors through various interactive sessions. Like the past editions, the 13th edition of the festival is a much-awaited event for all the bibliophiles who will join the literary extravaganza at the iconic heritage building Park Mansions on Park Street Kolkata, which will also be LIVE streamed to the audience across the world. The virtual sessions will be LIVE streamed on Facebook and YouTube so that everyone can watch them LIVE from anywhere in the world.

Speaking about the festival, Maina Bhagat, Director of Apeejay Kolkata Literary Festival (AKLF) since its first edition in 2010 said, “The 13th Edition of the Apeejay Kolkata Literary Festival, sets its sights on our fast evolving world, and the changes that lie in store in the years ahead. Curated meticulously to meet the challenges of the Hybrid/Virtual format, with delegate participation from across 3 time zones, this acceleration to digital connectivity has not stopped us from moving forward with this key initiative. The Festival, packed with thought provoking, entertaining and informative sessions, is a celebration of the written word, in the time of Covid.” (IANS)