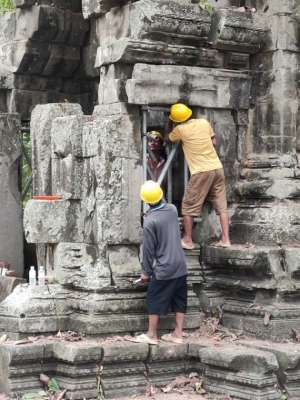 Phnom Penh– Cambodian authorities is restoring another three Buddha statues at Bakan tower of the famed Angkor Wat temple after the previous one was restored, the Apsara National Authority (ANA) said on Tuesday.

Soy Sophearin, technical officer with the ANA’s Department of Conservation of Monuments and Preventive Archeology, said the restoration project of the Buddha statues began in early February and is scheduled to be completed within five months, reports Xinhua news agency.

“The Buddha statues in Bakan tower had been damaged by natural factors and bats’ urine, a source of moisture and salinity,” he said.

Cambodian experts will remove an old net and replace it with a new one in order to prevent bats from entering the structure, Sophearin said, expressing hope that the bats will no longer be able to stay at the location when the restoration is completed.

In November last year, the experts also completed the restoration of a ruined Buddha statue in the south of the Bakan tower, he added.

The 401-square km Angkor Archeological Park, inscribed on the World Heritage List of the Unesco in 1992, is the kingdom’s most popular tourist destination.

During the pre-Covid era, the site received up to 2.2 million international tourists in 2019, earning a gross revenue of $99 million in ticket sales.