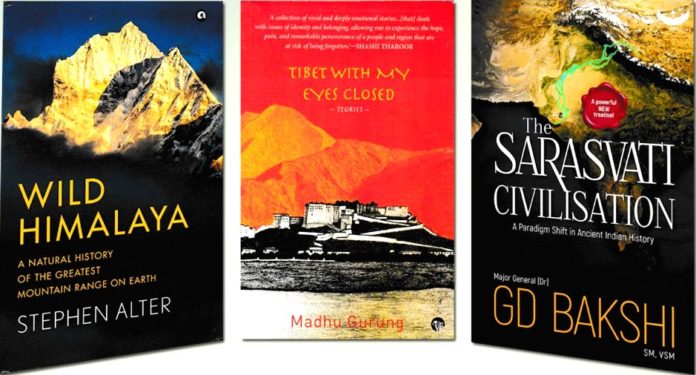 New Delhi– Go beyond defining mountains only by their height, though the summit of a peak is nothing more than the point where it gives way to clouds and the sky; next, ponder over a paradigm shift in ancient Indian history in the modern day search for the mythical Sarasvati river; and finally, make your way through an emphatic and enhanced collection of stories about Tibetan refugees starting anew in India.

The IANS bookshelf has a mixed bag to offer this weekend. Immerse yourself as you acquire knowledge.

Born in Mussoorie, the author of 20 books of fiction and non-fiction and the founding director of the Mussoorie Mountain Festival, Stephen Alter considers himself an endemic species, having spent most of his life in what is rightly considered one of the greatest mountain ranges in the world.

Not surprisingly, he begins his latest work with a parable about two mythical characters, Nilli and Nipu. The former made the earth and when complete, it turned out so big that the latter put the sky as a lid above it. But the lid was too small. So Nili pushed and pulled the soil together until the sky and earth were the same size — and as a result, parts of the world stood up as mountains.

“Living in the mountains shapes a person’s perspective, gazing out across the valley below or back into the interior Ganges, observing both the familiar and the unknown from the vantage point of home,” Alter writes.

“The quest for an ancient river that was irrevocably lost some 3,900 years ago, is quintessentially a quest for a lost sense of self in the Indian civilisation. It is in essence, a quest for unravelling its true identity. It is about — who are we as Indians,” writes Maj. Gen. Bakshi, a military historian and decorated combat veteran.

Then, there are questions like who were the Indo-Aryans, who laid the foundations for our present day Hindu culture in India? Were they aliens or were they indigenous? If they were aliens, where did they come from? Where is the mythical Aryan homeland? Is it in Turkey-Anatolia? Or is it the steppes of Central Asia? Where do Indians have to go in search of their roots?

“A quiet revolution has taken place in our awareness of our history as a people. As more truth seeps through the dragnet of the Leftist censors, Indians are becoming acutely conscious of their past. The Landsat satellite had beamed back images of the dried out Sarasvati river in the 1970s. Slowly, as the pieces of the jigsaw were pierced together, the Indians began to uncover a past of a lost civilisational glory; of great antiquity, sophistication and above all, an astonishing degree of cultural continuity and persistence over time and space. India has a heritage that comes unbroken from the remote past to the current era. India is beginning to discover its lost sense of self,” Bakshi writes in attempting a paradigm shift in ancient Indian history.

You don’t have to agree with everything the book says, but a change in perspective is always welcome.

“Prayer flags of five colours are synonymous with Tibetan Buddhism. The Buddhists believe that flags promote peace, compassion, strength and wisdom, with the winds carrying the goodwill and the blessings of the mantras pervading across all spaces to bless each sentient being. But even as they fade from exposure to the elements of nature, they become a permanent part of the universe,” writes Gurung, who started her career as a journalist and has worked with organisations like Oxfam and the BBC World Service.

Each of the stories she tells of Tibetans rebuilding their lives in India epitomises one element of the prayer flags — space, wind, fire, water and earth — for they have some element of that colour woven into their background.

“There is an old Tibetan saying: ‘If I tell you my dream, you might forget it. If I act on my dream, perhaps you will remember it, but if I involve you, it becomes your dream too’,” Gurung writes.

One thing is for sure: this book will keep alive dreams contained in its pages. (IANS)