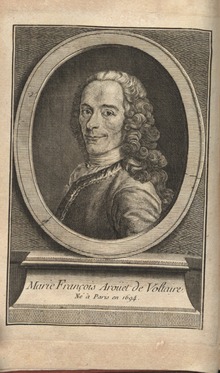 Among the paradoxes of the human condition is our tendency to follow the loudest talkers — the polarising, patronising ones who can convince us to ignore pain they inflict now for future utopias, while forgetting those who advanced our freedom and rights by mercilessly mocking prejudice, tyranny, intolerance, hypocrisy, excess nationalism, and such abuses. Like this French philosopher, who even chose satirical story-telling to make his views more understandable.

And Francois-Marie Arouet “Voltaire”, among the paladins of the Age of Enlightenment and inspiration for two world-changing revolutions (American and French), was also one of those whose basic creed can be summarised in one short and simple sentence.

In his case, it was not the common but misattributed: “I disapprove of what you say, but I will defend to the death your right to say it;” but rather, “Think for yourself and let others enjoy the privilege of doing so too.”

Born in Paris on November 21, 1694, to a minor treasury official, Voltaire was the youngest among his siblings (three brothers — two who didn’t survive infancy — and a sister). While his father wanted him to follow his footsteps as a lawyer, he wanted to be a writer and, after some travails, prevailed in his desire.

But his life as a writer, even as versatile and prolific as he was, with almost 2,000 works across all literary forms (novels, plays, poems, essays, histories, encyclopaedic dictionaries, scientific treatises, pamphlets, et al), was not sedentary but quite eventful.

It comprised spells of imprisonment (for insulting noblemen and the French royal family), banishment from cities and exile (including a considerable time in Britain), high favour from monarchs like Frederick the Great and comfortable residence in their courts, but was soon followed by messy falling outs and return to an itinerant life, and not many fixed abodes (one of his estates was on the French-Swiss border so he could bolt in either direction whenever so required). It was only in February 1778 that he could return to the city of his birth — after a quarter century — and died there in May.

Works like “Letters Concerning the English Nation” (1733), “Elements of the Philosophy of Newton” (1745), “The Age of Louis XIV” (1751), “Treatise on Tolerance” (1763) and the “Philosophical Dictionary” (1764) are seminal in their own right while still remaining relevant. Voltaire’s fiction is a more optimal place to view his thought.

The most famous among this is “Candide” (1759), a merciless lampoon of the theory of German polymath Gottfried Wilhelm von Leibniz, also known as an inventor of calculus and mechanical calculators, that we live in the best of all possible worlds.

In this witty parody of a romantic adventure, we follow the eponymous kind-hearted but naive hero, after he is booted out of his sheltered existence (where his tutor, Dr Pangloss — a caricature of Leibniz — has taught him this theory) through a series of vicissitudes across Europe and South America and back. In this course, Candide, who has learnt to ask, “If this is the best of possible worlds, what then are the others?”, meets all his former associates, who have undergone many misfortunes (even Pangloss, who still holds his belief) and all finally find peace in running a small farm in Ottoman territory.

More engrossing, but more parable-like is “Zadig, or The Book of Fate” (1747). Here again the eponymous young, good-hearted, philosophically-inclined hero, a native of Babylon in some bygone age, has a spell of ever-changing fortunes which see him rise to great heights and fall to great lows, be it love, life or career. However, most of the issues it raises are contemporary, only thinly-veiled.
In any case, two episodes stand out — one is the section where Zadig exhibits his detective skills (used more or less verbatim towards the beginning of Umberto Eco’s “The Name of the Rose” for William of Baskerville to display his forte), but involves some less than salutary consequences for him.

The other is his journey with a hermit, who allows him to accompany him on the condition that he doesn’t question any action. Sure enough, the hermit does many strange things, Zadig can’t restrain himself, but then things are not what they seem. Voltaire took inspiration from Jewish and Islamic religious tradition (in the former, it is Moses and an angel, and in the latter, the hermit is the mystical Khizr).

Two more works that merit mention are short stories “Microgemas” (1752), where the axiom of humanity being the crowning pinnacle of creation is mercilessly scoffed at, and “The World As It Goes, or the Vision of Babouc”, where Babouc, a Scythian nomad, is tasked by an angel to go to Persepolis and judge whether it merits destruction. It is a tricky dilemma but our hero finds a way out.

Voltaire was by no means perfect, but the useful lessons he taught outweigh the faults. We must learn this lesson at least from him. (IANS)