Mumbai– Actress Priyanka Chopra is set to star in Netflixs upcoming project, a superhero movie titled “We Can Be Heroes”.

It is still not known if the Indian beauty will play a superhero or not, but the film is for kids and is being written, directed and produced by Robert Rodriguez, director of the “Spy Kids” franchise.

The film is about how a group of kids steps up to save the world when aliens abduct all of Earth’s superheroes.

“I’m so proud to have produced a special film like #Paani. Congratulations to our director @adinathkothare and to the entire team @PurplePebblePic @madhuchopra @Iamsidchopra for our second National Award,” Priyanka had tweeted.

Mumbai– “Student of the Year” co-stars Varun Dhawan and Alia Bhatt have joined forces, this time for charity.

Alia has announced the next instalment of her closet sharing initiative ‘Mi Wardrobe is Su Wardrobe’. After actors Anushka Sharma and Sonakshi Sinha, Varun is the third celebrity guest to share handpicked favourites from his personal wardrobe, for charity.

“Varun is making his MiSu debut and I’m really thankful for his support! We need to start adopting a more conscious approach towards buying and discarding garments. We want to encourage more and more people to consider adding quality, preowned garments to their wardrobes and to help our environment by reducing waste,” Alia said.

Proceeds from this wardrobe will support Salaam Bombay Foundation, which works with adolescents growing up in urban slums, to keep them in school through multiple programmes that impact their education, health and livelihood.

Speaking on the association, Varun said: “Sharing a garment is the most fun form of recycling it and keeping it away from landfills. Mi Wardrobe is Su Wardrobe not only gives fans across the world the opportunity to own a garment from my personal closet, but together, we’re also doing our bit for the environment.”

The wardrobe is available on Saltscout.com, an online platform for charity auctions and sales.

Mumbai– Chitrangda Singh is all set to make her digital debut as an actress and a producer, with a musical drama web series. The shoot of the series begins at the end of the year.

“I will be starting to shoot for a web series at the end of the year or the beginning of next year. So, there is a bit of free time at the moment. The series is will be a musical drama. I am excited because I was waiting to do something interesting. It’s been a long time since I have acted in a project,” said Chitrangda, on Wednesday in Mumbai.

Chitrangda also revealed she is developing the series under her production banner, while interacting with the media at the Women Entrepreneur Exhibition of the Ladies’ Wing of the IMC Chamber of Commerce and Industry. Actress Kajol was also present at the event.

The actress has ventured into production in the past with the 2018 film “Soorma”, a biopic of former Indian hockey captain Sandeep Singh. She said that as a producer she wants to support content that is interesting and engaging.

Chitrangda was last seen onscreen in “Baazaar” (2018). She played Saif Ali Khan’s wife in the film.

Mumbai– National Award-winning actor Akshay Kumar has made it to the fourth position on the Forbes magazine’s Worlds Highest-Paid Actors Of 2019 list, beating Hollywood stars like Bradley Cooper, Adam Sandler and Will Smith. 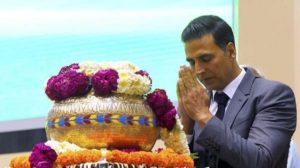 Akshay made his acting debut with a small role in the 1987 filmmaker Mahesh Bhatt’ “Aaj”. He then appeared as the lead actor in “Saugandh” and rose to fame with the suspense thriller “Khiladi”, which tagged him as Bollywood’s very own ‘Khiladi’.

Mumbai– Gulshan Kumar’s daughter Khushali Kumar is all set to make her Bollywood debut opposite R. Madhavan in “Dahi Cheeni”. She plays a lawyer in the film, and has already started doing her homework to get into the skin of the character.

“As part of my preparation, I have started interacting with renowned lawyers, to understand their work ethics and legal proceedings. I have been visiting the courtrooms to see how they operate and how a lady lawyer reacts in a court. In fact, I met some powerpacked lady lawyers. It was a great honour to stand with them and get clicked, though I plan to spend more time across various courts to understand their mannerisms and conduct in the courtroom. I am sure it will help me prepare for my stint as a lady lawyer in Dahi Cheeni,” said Khushali.

She describes her debut flick as “a slice-of-life comedy”, adding: “The film shines light upon the problems that societies across the world face today. It is based on a true story and is so far removed from the pomp and show of Bollywood that it feels like a breath of fresh air. The film has a quirky and realistic approach.”

Khushali, who dreamt of becoming an actress right from her childhood, will be making her debut alongside R. Madhavan and is feeling a bit scared already. “It’s scary to stand next to Maddy but I have made up my mind and am ready to go at it full throttle.”

Mumbai– Actor Athar Siddiqui, who featured in the mythological show “Paramavatar Shri Krishna”, has joined the cast of the show “Jag Janani Maa Vaishno Devi” as an antagonist.

“I play the role of the lead antagonist, Bali, who is an asur. I’ll be seen taking the fight against God Indra,” he said, adding: “I am thankful to our makers, Rashmi Sharma productions, to give me an opportunity to be part of such a great show.”

Mumbai– Superstar Aamir Khans daughter Ira has posted a new happy photo of herself with boyfriend Mishaal Kirpalani, but fans are concerned about her because she used “intense hashtags” like #existentialcrisis in her caption.

“Everything will be okay. #missyou #life #existentialcrisis #acceptance #notsomidlifecrisis #love #relationship #sofarsogood #us #theworld #humanity #keepcalm #itsokay #smile,” Ira captioned the photo in which Mishaal is holding Ira from behind.

Although some fans found the photo to be “nice”, one particular asked: “Why?”
Another wrote: “intense hashtags”. Another user asked her to elaborate on what she means by “everything”.

Referring to the popular line — “All Izz Well” — from Aamir’s blockbuster film “3 Idiots”, one follower wrote: “All Izz Well”. (IANS)