Using its ‘flowercycling’ technology, the start-up has also launched a product that it calls ‘Fleather’ — an alternative to animal leather made with flowers.

In the media release announcing the investment, Alia is quoted as saying: “I admire the founder’s vision of making incense and bio-leather from recycled flowers, thereby contributing to keeping our rivers clean, creating a humane alternative to leather and providing employment to women in India’s heartland.”

Speaking on the investment by Alia, the IIT-Kanpur Director, Abhay Karandikar, commented: “The innovative ‘flower cycling technology by PHOOL’ has enabled sustainable and eco-friendly waste flower management, and the uplift of hundreds of women along the way.”

Shilpa Shetty Kundra, who has been associated with the show for quite a long time, describes how it has impacted her life. She said: “Every year, these kids blow your minds with their unparalleled talent and dedication. Watching this younger generation of talent capture the stage inspires me to reinvent, unlearn, and relearn.”

The top five finalists will showcase their talent and compete with each other as they view for the top prize. They are Florina Gogoi, Sanchit Chanana, Pruthviraj Kongari, Esha Mishra and Neerja Tiwari. “They make me believe in the process and in divinity even more,” Shilpa said. “It assures me that the craft and the future of India are in the best hands.”

Florina Gogoi shared her experience of being on the show and said it was a great feeling to reach this point and she was willing to give it her best.

“It is a very big achievement for me to be a part of ‘Nachpan Ka Maha Mohatsav’,” she said. “I am experiencing all kinds of emotions and am elated to have reached the top five ladder. The goal is yet to be achieved, but I will give it my all.”

Sanchit Chanana added that although he was excited, he was anxious too about the finale. He gave the credit to Vartika, his choreographer and guru.

Pratik Gandhi: I take decision based on my gut feeling

New Delhi– Actor Pratik Gandhi, who became an overnight sensation with his powerful performance in the web series ‘Scam 1992’, has talked about how he decides projects he wants to star in or not.

The actor in a conversation with IANS said: “It is a simple approach for me I read the script and I also want to have a narration from the director to understand his vision. If it matches with me and I feel connected and feel it from within then I say yes.”

It’s all about the “gut feeling” for Pratik, who is gearing up for the release of his next film ‘Bhavai’.

“I take my decision absolutely based on my gut (feeling). It is all in the gut feel. I don’t see the size of the project or names that are involved. it does not make sense to me,” he said.

Pratik also talked about the pros and cons of being famous.

“The good part is that you will be given a lot of options as far as stories are concern. You are in a position you can select a project create interesting characters who can touch peoples hearts. That is a good part I think,” he said.

Pratik added: “The very tricky part is to manage your state of mind and your focus… All around you everyone is thinking and expecting something but you have to be equally human, open and connected to the character.”

‘Bhavai’ is slated to release on October 22. The movie stars Pratik as Raja Ram Joshi and actress Aindrita Ray as Rani as lead characters.

The movie revolves around the love tale of two actors working in a drama company and how their reel life affects their real life off stage.

Mumbai– A day after they were sent to judicial custody, Aryan Khan, son of megastar Shah Rukh Khan, and seven co-accused in the rave party raids, were sent to the Arthur Road Central Jail, here on Friday afternoon.

The two women accused – Munmun Dhamecha and Nupur Sarika – were sent to the Byculla Women’s Jail, and the others – Arbaaz Merchant, Vikrant Chhoker, Ismeet Singh, Mohak Jaswal, and Gomit Chopra were sent to the ARCJ, along with Aryan Khan.

Since their arrest on October 3 – a day after their detention following the rave party raid aboard the Cordelia Cruise ship – they were kept for six nights in the NCB lockup in the central agency’s custody, in south Mumbai till they were sent to judicial custody on Thursday by Additional Chief Metropolitan Magistrate R. M. Nerlikar.

They will remain in the respective jails till they are granted bail, even as their lawyers and the Narcotics Control Bureau advocates were engaged in a fierce legal battle over this.

This morning, all the eight accused youngsters underwent a medical test at the Sir J.J. Hospital, before they were taken to the jails by the NCB under tight security.

Mumbai– Actors Richa Chadha and Ali Fazal, who are well-versed with international cinema and how new-age content is evolving, announced their debut production ‘Girls Will Be Girls’, and said they intend to bring stories that are ‘glocal’ and clutter-breaking at the same time. 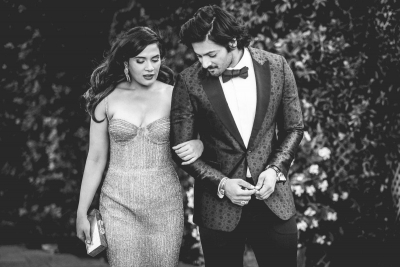 Being outsider-insiders, talking about their project, Richa said: “Authentic, original, and honest stories go a long way, and it is our endeavour to make films that exhibit nothing less. We aim to bring stories that are universal and unique. Through our projects, we want to discover the unheard voices and present clutter-breaking content.”

Ali added: “As artists, we not only want to work in interesting projects but also make cinema that is groundbreaking and thought-provoking. We want to bring to the audience stories that matter to us and in turn, resonates with them. We sincerely hope that people will enjoy the films we make under our banner.”

Ali is known for working in several international projects that include British-American film ‘Victoria & Abdul’ and ‘Furious 7’, among others.

Richa on the other has travelled to the Cannes Film Festival, Venice International Film Festival, London Indian Film Festival with films like ‘Masaan’, ‘Love Sonia’, and the web series ‘Inside Edge’ for Amazon Prime Video.

It is a truth universally acknowledged that the Indian film industry is one of the largest cinema hubs in the world and there is no dearth of possibilities and opportunities within this fraternity.

It is this line of thought that has motivated Richa and Ali to bring to celluloid their maiden project ‘Girls Will Be Girls’, directed by Shuchi Talati and produced through their banner Pushing Button Studios, Crawling Angel Films, and Dolce Vita Films France. (IANS)