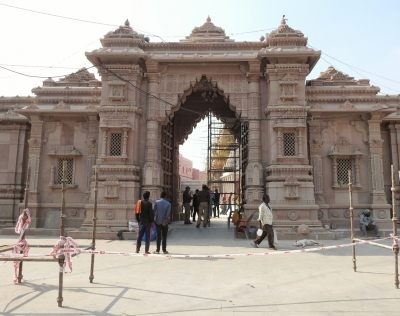 New Delhi–Ahead of next year’s Uttar Pradesh assembly polls to showcase the redevelopment of Kashi Vishwanath temple in Varanasi — the parliamentary constituency of Prime Minister Narendra Modi, the Bharatiya Janata Party (BJP) has planned a series of events in the temple town for a month starting December 13.

Modi will dedicate the redeveloped Kashi Vishwanath temple to the nation on December 13. A conference of chief ministers of the BJP ruled states will also be held in Kashi.

Sharing details of the events planned, Union Minister G. Kishan Reddy and BJP national general secretary Tarun Chugh said that Prime Minister Narendra Modi, who is the world’s most popular leader and also a visionary who has re-established India’s ancient culture on the global arena, is realising the dream and ambition of crore of Indians through ‘Divya Kashi – Bhavya Kashi’ on December 13.

“Prime Minister Modi on December 13, will dedicate to the nation and the world the massive redevelopment and beautification of the revered Kashi Vishwanath Dham. It is a matter of great pride, honour and happiness for every Indian,” they said.

Chugh said that several important personalities and dignitaries from the country including religious gurus and sages, intellectuals, Chief Ministers and Deputy Chief Ministers from various states, Union Ministers and Ministers in the Uttar Pradesh government will take part in this grand ceremony.

BJP chief JP Nadda has planned several events at the party level to make this a historical event.

According to Chugh, on December 13 grand programmes and events will be held in all ‘Jyotirlings’ across the country, while giant LED screens will be put up in 51,000 spots across the country where the live telecast of the grand ‘Divya Kashi – Bhavya Kashi’ programme will be done.

Among a series of programme, on December 10, 11 and 12, for three days, a cleanliness drive will be organised in all the temples, ashrams and religious places across the country where all elected representatives of the BJP, MLAs, MPs, Ministers, Chief Ministers and Deputy Chief Ministers will take part.

The cleanliness and beautification drive of the Kashi has already started on December 5, which will continue till December 12, 2021.

On December 14, 2021 the BJP will be organising a conference of all Chief Ministers and Deputy Chief Ministers where Prime Minister Modi, Nadda and BJP national general secretary (Organisation) BL Santhosh will also take part.

The BJP has appointed Chugh and Ashish Sood as in-charge and co-incharge respectively of the conference. All Chief Ministers and deputy chief ministers will also be on a three day religious and cultural ‘pravas’ from December 13 to 15.

On December 17, a conference of Mayors will be organised in Kashi. The in-charge and co-incharge of this programme are Arun Singh and Rekha Gupta, respectively.

On December 23, 2021, a seminar is being organised in Kashi to promote natural and organic agriculture where agriculture scientists, progressive farmers and agriculture experts from across the country will participate. Prime Minister Modi will address the conference.

On January 12, 2022, to mark the birth anniversary of Swami Vivekananda, a youth conference will be organised in Kashi. (IANS)