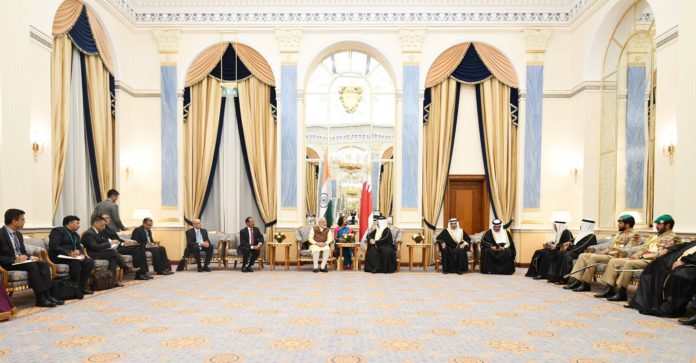 “In a kind and humanitarian gesture, the Government of Bahrain has pardoned 250 Indians serving sentences in Bahrain. PM@narendramodi thanks the Bahrain Government for the Royal Pardon,” the PMO tweeted.

Modi was in Bahrain on a two-day visit, the first by an Indian Prime Minister.

In a veiled attack on Pakistan, India and Bahrain also called on all countries to reject the use of terrorism against other countries, cut off support and financing to terrorists and bring perpetrators of acts of terrorism to justice. Both sides also agreed to enhance cooperation in counter-terrorism and exchange of intelligence and information.

In a joint statement issued after talks between Prime Minister Narendra Modi and King Hamad bin Isa Al Khalifa and Prince Khalifa Bin Salman Al Khalifa, the two sides “reaffirmed their condemnation of terrorism in all its forms and manifestations, regardless of the identity of the perpetrators and their motives, and they agreed to further enhance cooperation in the field of security, counter-terrorism and the exchange of intelligence and information”.

The two sides also noted the need for concerted action by the international community against terrorism including through early adoption of the UN Comprehensive Convention on International Terrorism and underlined the importance of comprehensive sanctioning of terrorists and their organizations by the UN, the statement said.

India and Bahrain also expressed satisfaction at their ongoing bilateral cooperation in the area of security and welcomed the ‘Security Dialogue’ meetings at regular intervals, at the level of Deputy National Security Advisors.

Both sides discussed ways and means to further promote cooperation in cyber security, including prevention of use of cyber space for terrorism, radicalisation and for disturbing social harmony.

“Both sides called on all states to reject the use of terrorism against other countries; dismantle terrorism infrastructures where they happen to exist and to cut off any kind of support and financing to the terrorists perpetrating terrorism from all territories against other states; and bring perpetrators of acts of terrorism to justice,” it said.

With regards to regional connectivity projects, both agreed that they should be based on international law including respect for sovereignty and territorial integrity of states – in a reference to the $60 billion Beijing-funded China Pakistan Economic Corridor that cuts through the Pakistan-occupied Kashmir, claimed by India. India has refused to join China’s Belt and Road Initiative, saying that it infringes on the territorial integrity of states.

In the field of energy, the two sides agreed to focus on enhancing cooperation in the sector, covering the areas of joint exploration and training of human resources.

Prime Minister Modi congratulated Bahrain on the recent discovery of huge oil and gas reserves. The Indian side highlighted the interest of its energy companies to pursue opportunities of conventional exploration as well as development of newly-discovered oil and gas assets in Bahrain.

The MoUs inked during the visit, included: Cultural Exchange Programme between India and Bahrain; Collaboration between Indian Space Research Organisation (ISRO) and Bahrain’s National Space Science Agency (NSSA) in the area of space technology; Collaboration of Bahrain with the International Solar Agency; MoU between Bahrain’s Electronic Network For Financial Transactions (Benefit) and National Payments Corporation of India (NPCI) for Launch of ‘RuPay Card’ in Bahrain.

Earlier, Prime Minister Modi was conferred the King Hamad Order of the Renaissance by the Bahraini King in recognition of India’s strong friendship with the Gulf nation and his efforts to strengthen bilateral ties.

Tweeting about the honour conferred upon him on Saturday night, PM Modi said: “I humbly accept The King Hamad Order of the Renaissance. This is a recognition of India’s strong friendship with Bahrain, which goes back hundreds of years and is expanding rapidly in the 21st century.”