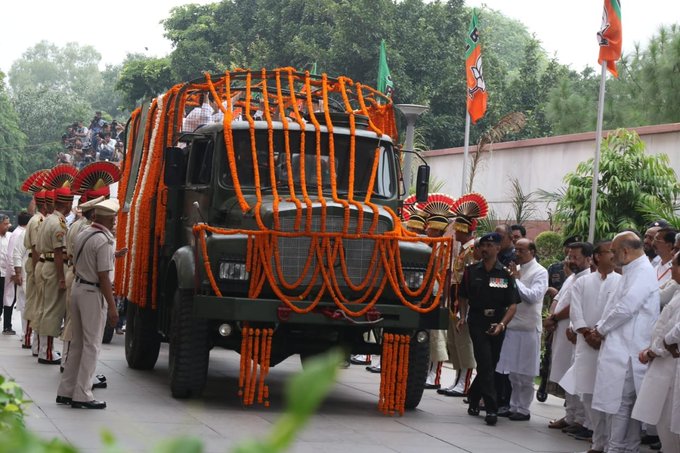 New Delhi–The mortal remains of former Finance Minister Arun Jaitley, one of the veterans of the Bharatiya Janata Party (BJP), were given the last rites with full state honours at the Nigambodh Ghat here on Sunday amid heavy rain, a day after he passed away.

A virtual Who’s Who of the BJP and the Narendra Modi government, the legal fraternity and hundreds of common people were in attendance as the late leader’s son, Rohan Jaitley, performed the last rites. When the funeral pyre was being lit, it started pouring.

The former Union Minister, who Prime Minister Modi counted as a friend, breathed his last at the AIIMS, where he had been undergoing treatment since earlier this month, on Saturday. He was 66 and had been ailing for some time.

Besides Vice President M. Venkaiah Naidu, senior political leaders cutting across the party lines reached the crematorium to pay their tributes to Jaitley.

Prime Minister Modi, who is abroad, expressed grief over the demise.

Modi tweeted: “With the demise of Arun Jaitleyji, I have lost a valued friend whom I have had the honour of knowing for decades. His insight on issues and nuanced understanding of matters had very few parallels. We will miss him.”

Hundreds of mourners gathered at the ghat to bid adieu to the BJP veteran who began his political career at a young age and was imprisoned during the Emergency period of 1975-77. He enjoyed personal rapport with leaders of various political parties.

His mortal remains, wrapped in the tricolour, arrived at the crematorium from the BJP headquarters around 2 p.m. Delhi Police gave a gun salute in Jaitley’s honour.

“Jaitley’s demise is a big loss to the nation as well the party,” said Arjun Singh, a local BJP leader.

A man in the the crowd said: “He was a leader of the people’s choice… not only us but he was loved by every politician, be it from BJP or any other party in the alliance or the opposition. The nation has lost a gem.”

Rajni, a resident of Kalkaji, said: “I am a great political enthusiast and loved listening to all his speeches… he was an outstanding orator.”

Earlier in the day, Jaitley’s mortal remains were brought from his south Delhi home to the BJP headquarters where party leaders paid their last rites to the departed soul.

A minor scuffle broke out between the security forces and the common people as the latter tried to enter the party headquarters. The doors were later opened for the people, following which a long queue emerged on the Deen Dayal Upadhyay Marg to pay their last respects to the BJP stalwart.

Jaitley had been admitted to the All India Institute of Medical Sciences (AIIMS) on August 9 after he complained of breathlessness. His condition had steadily worsened, and he was put on life support. The recipient of a kidney transplant, he had also undergone dialysis on Thursday.

His condition deteriorated on Friday and he breathed his last at 12.07 p.m. on Saturday.
(IANS)