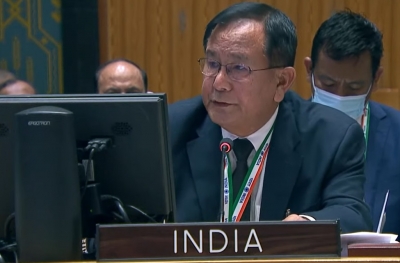 United Nations– As a victim of cross-border attacks, India has said it regrets that state sponsors of terrorism are “allowed to go scot-free” for serious violations of international law and urged the international community to make them accountable.

“It is indeed a sad state of affairs that state sponsors of terrorism have been allowed to go scot-free,” R.R. Singh, India’s Minister of State for External Affairs, told the Security Council on Thursday.

“Any debate on accountability would be incomplete without taking into account the carnage wrought by terrorist forces, particularly those which are backed by State actors for pursuing political objectives,” he said.

Calling terrorism “the greatest threat faced by humankind,” he said, “the international community should stand firm on its opposition to terrorism in all its forms and manifestations and reject any attempt to provide any justifications for terrorist acts”.

Albania’s Prime Minister Edi Rama, whose country is the President of the Council for this month, presided over the debate on “Strengthening accountability and justice for serious violations of international law”.

Rama said even though countries have enacted laws to uphold norms of behaviour, millions have suffered because of violations.

He added that in invading Ukraine, Russia has committed crimes against humanity and should be made accountable.

“All serious violations of international law must be treated with the same level of fairness and determination,” he said.

Singh said, “The tools to address the serious violations of international law need to be used judiciously, without any selectivity, in line with principles of the UN Charter.”

He stressed that countries should primarily be responsible for prosecuting serious violations of international law.

“The member states have the responsibility and obligation to ensure justice and accountability for gravest violations of human rights and mass atrocities, in line with their national legislations,” he added.

The international community should support the member states in ensuring justice for victims through processes based on nationally accepted norms of jurisprudence, Singh said.

“The process should also promote national reconciliation and inclusive future, he added.

“The imposition of universal jurisdictions on alleged acts of atrocities committed in the territory of a sovereign state need to be avoided as well,” he said.

Noting that India like many countries is not a signatory to the Rome Statute that set up the International Criminal Court (ICC), Singh added that “hastily” referring cases to it “primarily for political reasons” may not serve the ends of justice.

He asserted that “the acquittals in recent years have also cast a shadow on the credibility of the ICC”.

In high-profile cases in 2021, ICC’s Appeals Chamber upheld the acquittal of former Ivory Coast President Laurent Gbagbo and his supporter Charles Ble Goude on charges of crime against humanity committed regarding incidents in their country in 2010.

She cited the conviction in Germany of Syrian Colonel Anwar Raslan charged with overseeing torture at a Syrian detention centre as an example of several jurisdictions working together and with other partners to ensure accountability for international crimes. (IANS)