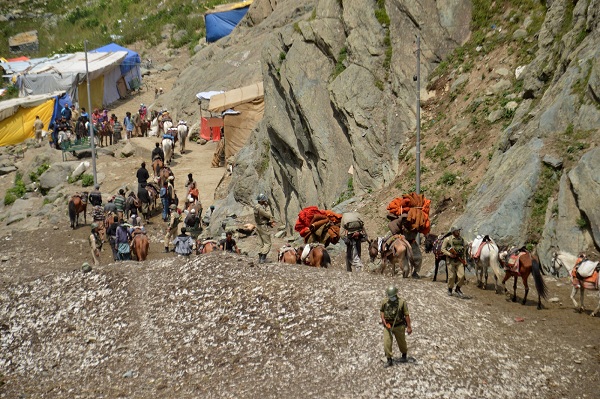 New Delhi– In view of the upcoming Amarnath Yatra, a conference was held on Wednesday at Army’s Chinar Corps to address the security and administrative issues with the Central Armed Police Forces and the Jammu and Kashmir administration in Srinagar.

According to the officials of the CRPF, the security and other logistics-related aspects were discussed in details to arrange a fool-proof security for the Yatra.

The Amarnath Yatra was suspended for the last two years due to Covid pandemic. A mass pilgrimage is expected this year during the Yatra which is going to commence from June 30, and continue till August 11.

The meeting deliberated on all aspects related to the annual pilgrimage and also discussed the plan to deploy the security forces, a source in the know of things said.

He also said that to cater the needs of the huge number of pilgrims and provide them a safe and secured passage in Jammu and Kashmir will be a major task for the security forces and the Jammu and Kashmir administration this year.

The source also said that the Army and other wings of the CAPFs also discussed the requirement of the para-military forces for this Yatra as it is expected that over 6 lakh pilgrims may visit the Holy Cave this year.

The coordinating meeting was chaired by Major Gen SS Slaria, the General Officer Commanding Kilo Force under Chinar Corps and brought out the aspects of coherent efforts of Indian Army, Paramilitary Forces and civil administration in ensuring complete safety and administrative needs for the pilgrims.

All the participants gave out their preparations on the Amarnath Yatra and assured the other stakeholders for a better synergy among them in view of the annual pilgrimage.

The conference was attended by senior officers of security forces and officials of the J&K administration. (IANS)