“This year, the 2017 Akshaya Patra event in Boston was very unique. Over 500 people came to contribute to the cause and I was touched by their commitment and warmth,” said Desh Deshpande, chairman of the Akshaya Patra Foundation USA. “Our Keynote Sanjeev Kapoor is not only an accomplished chef but a fantastic story teller.  His dramatic style of narrating the three very different lives that his father led as he moved from Pakistan to India after the partition was riveting. The story emphasized the point that given a chance everyone can succeed.  Everyone deserves a chance; no child should be denied education because of hunger.”

Also, remarking on the generosity of the Boston community and Chef Kapoor’s contribution to the evening, Emily Rosenbaum, CEO of Akshaya Patra USA, said, “There are thousands of children who are at risk of dropping out of schools at very young ages but for the hot, unlimited Akshaya Patra meals they get every day at school. Today, we are thrilled that our dear Boston community took on this challenge. Master Chef Sanjeev Kapoor said it correctly: “Food is everything. Food is love.” 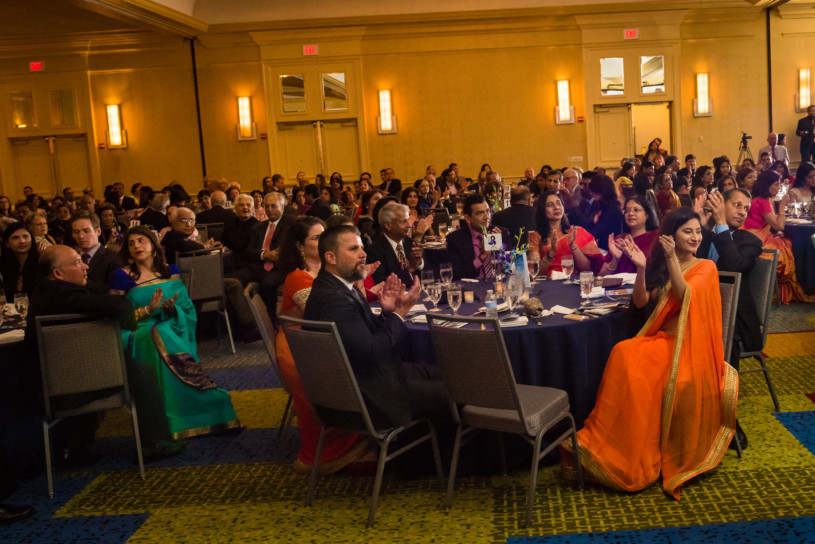 Rosenbaum said that the love of the Boston community was sparked by our wonderful lineup of speakers, singers and guests, including the incomparable Chef Kapoor and the smart, witty Masters of Ceremonies Nayak.

“35,000 children will be feed a mid-day meal daily at school with the generous gifts from the community,” Rosenbaum said. “Our deep gratitude goes out to all of the supporters and volunteers as well to Chef Kapoor and Ms. Nayak for making this possible.”

Many of the Boston Volunteer Committee members have been long-time supporters of Akshaya Patra.

Praveen Tailam, spoke for many of the Committee, when he explained why he supports the organization. He said: “Hunger is the most primal and basic need for living beings. Akshaya Patra is addressing this basic need at the time when a human development and learning is at its most crucial stage for school age children. AP is shaping the future of the nation.”

For new donors and supporters, Akshaya Patra’s mission and Gala event gives them an opportunity to connect and give back to the place of their roots.

Parth Vedawala, stated, “The amazing work Akshaya Patra does in Massachusetts and all over the country brings people of all backgrounds together. Having joined the cause last year has helped me connect with my Indian roots and has also helped me connect with my community. A nourishing meal is the last thing a student should have to worry about. Hopefully, with everyone’s help, there will be no students in India who go hungry.”

The Benefit event also spotlighted the efforts of Akshaya Patra Youth Ambassador, Yash Patel, who gave a speech at the Gala.  Patel, a senior at Suffield Academy in Suffield, CT, nominated Akshaya Patra to be the Academy’s 2016-2017 community charity.  He and his fellow students organized fundraising events throughout the academic year.  Already Suffield Academy has raised $40,000 of their $60,000 goal.  The funds Suffield Academy raises will provide 800,000 school meals for children and a meal distribution vehicle to utilized in the state of Gujarat.

For more information about Akshaya Patra or making donations in the USA for Akshaya Patra initiatives, please visit www.foodforeducation.org or email Emily@apusa.org.

Event photos can be viewed on the Akshaya Patra USA Facebook page: http://tinyurl.com/k7ty5kd .