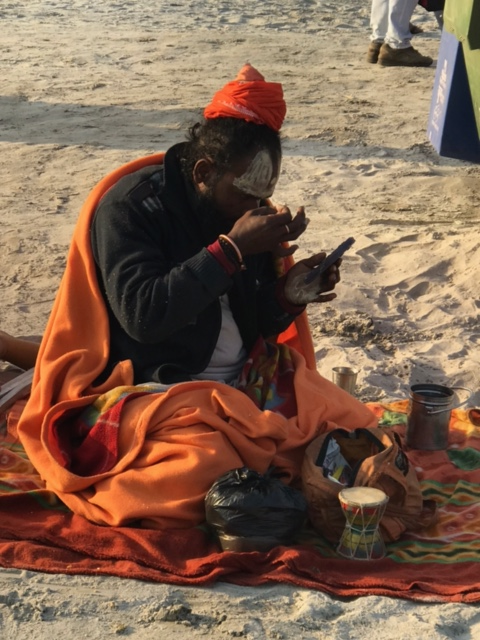 (Editor’s note:  Sonal Jhaveri, a resident of Brookline, MA for 40 years and an alumna of MIT (BS, MS) and Harvard University (PhD), recently visited India’s famed Kumbh mela in Allahabad. She journaled her journey with photographs and some notes. In her professional life, she has done research on brain development for many years. She currently teaches Science Communication at Dana-Farber Cancer Institute, Boston Children’s Hospital and MIT. She is the moderator for the India Culture Seminars hosted by India Discovery Center. Photos and text by Sonal Jhaveri)

ALLAHABAD–The Kumbh Mela, the largest religious festival on the planet, takes place in four cities in India: Hardwar, Ujjain, Nasik and Allahabad (now called Prayagraj). Tens of millions of pilgrims attend the festival. The largest of these gatherings occurs in Allahabad, located at the confluence of the holy Ganges, Yamuna, and (the mythical) Saraswati rivers; this year, 90-120 million or so pilgrims were expected to attend the Kumbh, over a period of seven weeks.

The Allahabad Kumbh occurs every six years, and is referred to as the Ardha Kumbh (half Kumbh, every sixth year) or the Poorna Kumbh (the full Kumbh, every 12 years). A Maha Kumbh occurs every 144 years. Hindus believe that when the planets are in the correct configurations, you can wash off all your sins by dipping in the Ganges river – this year, the first of six such auspicious dates for dipping was on Makar Sankranti (January 15th). I had the good fortune to partake of this activity on this day.

Below, I share below some pictures that I took at the 2019 Kumbh, along with a few of my thoughts/impressions of this extraordinary event.

Our camp was one of many that are constructed on the bed of the Ganges, once the river starts drying  after the We stayed in one of the tents below. This camp belonged to a very hospitable friend, whose family spends all seven weeks at the Mela – they have a full staff to help them during this time. Other camps are much more primitive, and in fact many people just sleep on a piece of cloth or on a blanket laid on the sand. And then there are the luxury tents that are up on a hill and are like 5-star (or you might even say 7-star) hotels. 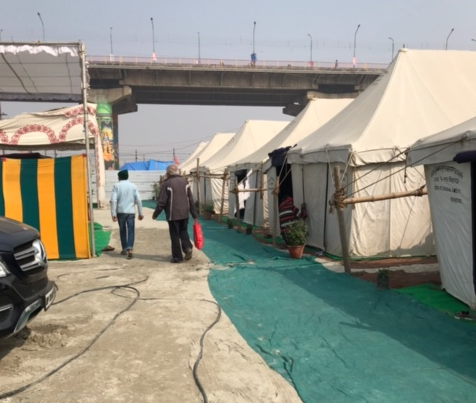 The first night, we walked through the pavilions for some of the akhadas (Hinduism has 13 major akhadas, or sects), and saw a stunning diversity of sadhus and Naga Bawas (literally “naked sadhus”; many are hatha yogis who vow to undertake the most stunning physical feats: for example, a naga bawa had vowed to stand on one foot for 15 years – he was in his twelfth year when we met him). All are very approachable and willing to answer any question you might pose. 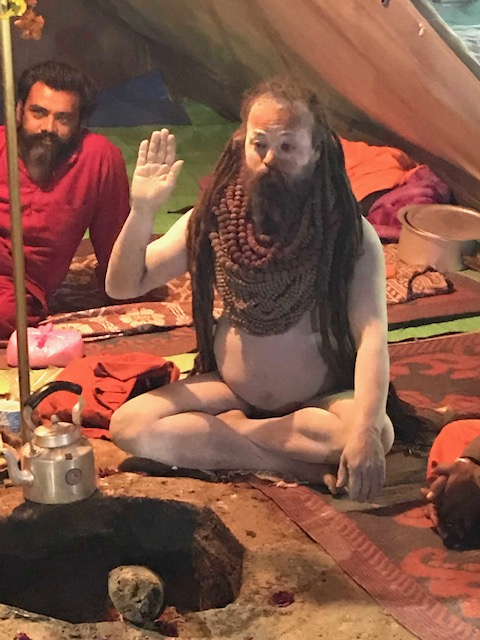 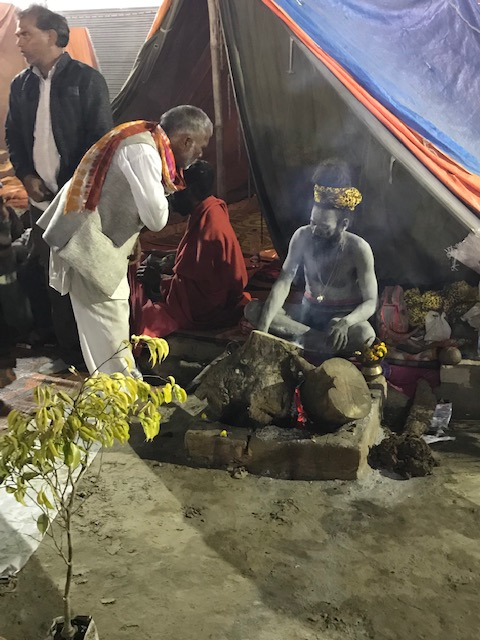 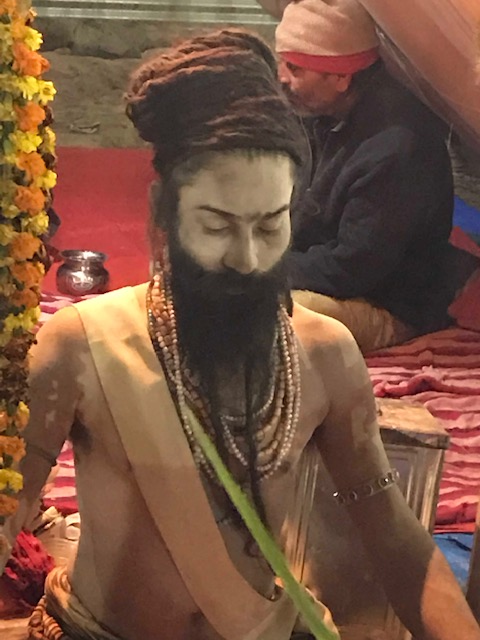 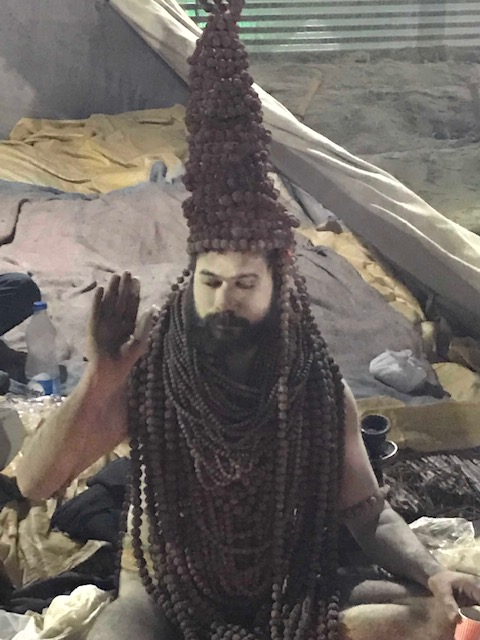 The next day we were on the Ganges river. Below are pilgrims in boats – waiting to take a dip at the Sangam (the confluence) of the holy rivers. The water was icy cold though very clean. The wind was high, but it didn’t deter any of us from jumping in at a point where you can actually see the waters of Ganga and Yamuna rivers mix. 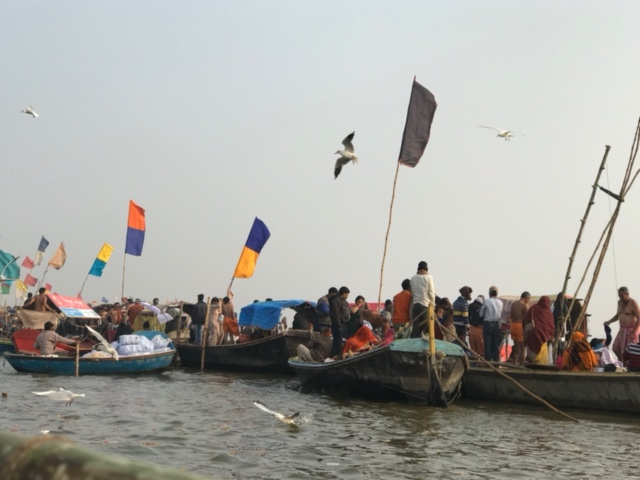 We then visited an ashram run by one of the akhadas. Here, they feed about 3,000 people – mostly the poor and the sadhus – three times a day, for as long as the Mela lasts. We helped out for a bit with serving the food. The number of people waiting to get a free meal is mind-boggling (and this was just one of several ashrams at the Mela where people were fed daily). The ashram also gives each person Rs. 100 with the meal – that’s about $1.50. Although we did see a few women and children, the overwhelming majority of folks that came to this ashram were adult and male.

The massive efforts by ashram volunteers, along with the immense need for a basic daily meal, were very humbling. 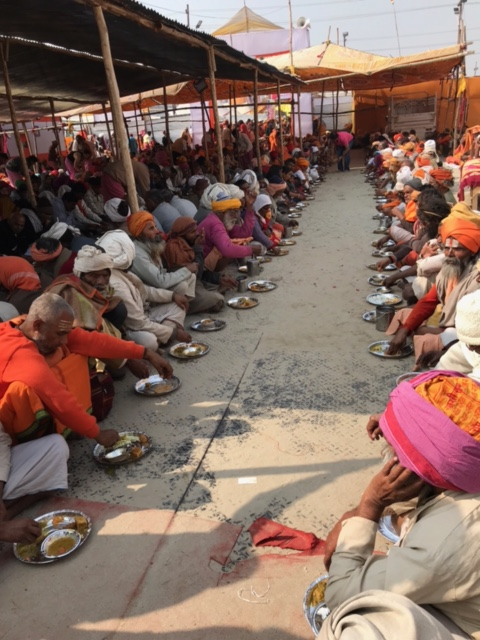 The day we were at the ashram, the meal consisted of puris, two vegetables, daal, rice, bhajias, and two kinds of deserts . The food was – a served from buckets. Helpings were generous, with seconds provided as requested.

Groups of pilgrims that belong to the same sect gathered during the day and often late into the night, to pray or listen to lectures. Much of their time is spent praying and chanting, listening to talks on Hinduism, or watching performances of the Ram Lila – re-enactments of the life of Lord Rama, from the Hindu religious epic Ramayana. 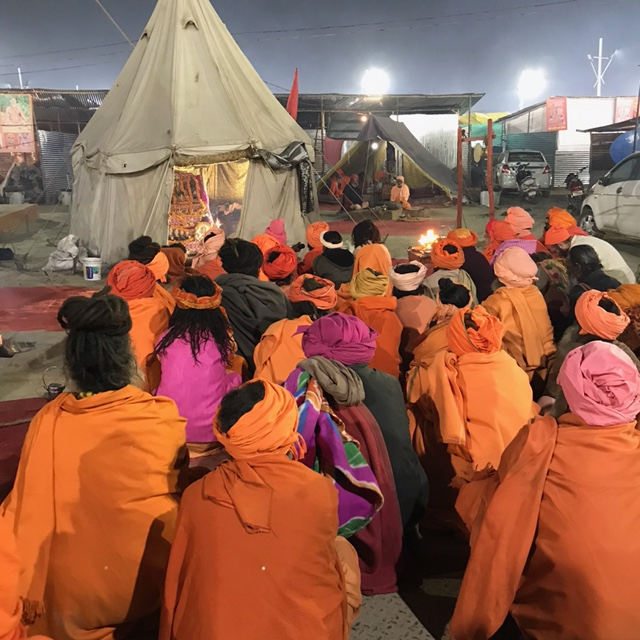 Walking on the bed of the Ganges in the evening. While the crowds were getting heavy, we still had lots of space to walk. The sand on the bed is extremely fine, with no pebbles, and (at least at the start of the festival) it was very clean. 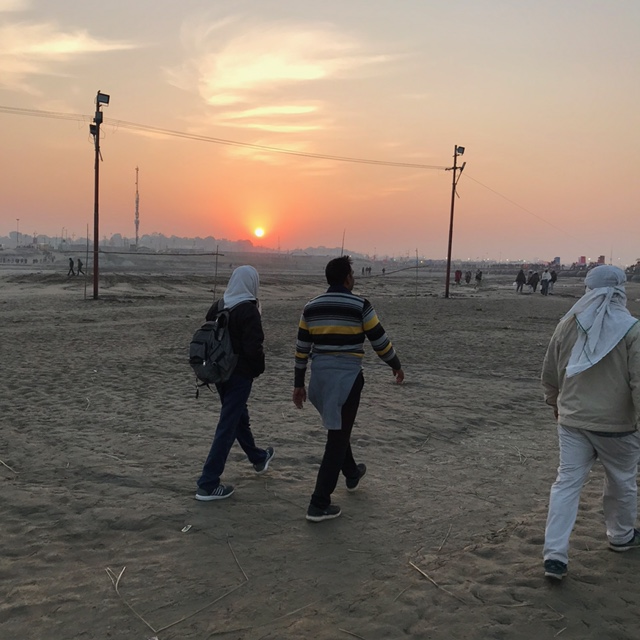 On our third day at the Mela we got an early start, to catch the Shahi Snaan Processions – these consist of members of each akhada walking a long distance towards the Sangam, then rushing into the icy waters to dip into the river. The procession for the akhada shown below was led by a few cavalry, then came some foot soldiers, followed by paramilitary. The police presence was everywhere: police and paramilitary receive special training in crowd control and in how to respond to pilgrims without becoming angry or violent – the law enforcement officers that we encountered were always extremely helpful, though understandably they often seemed a bit distracted. 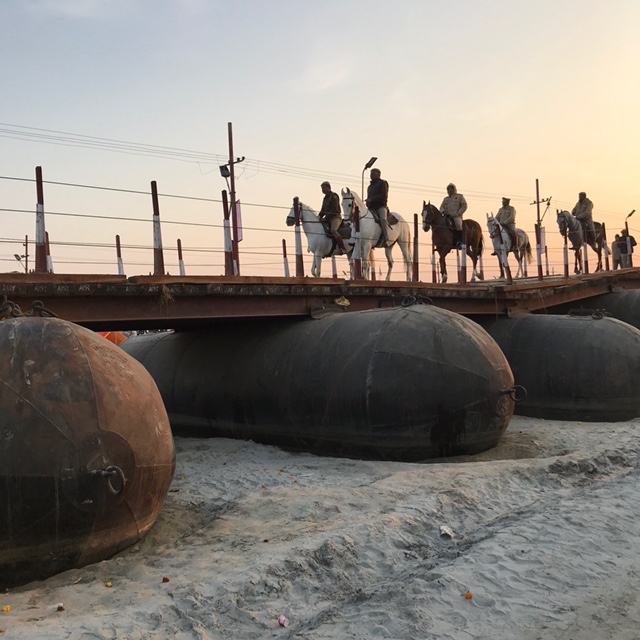 Then the main processions started. Each akhada (there are 13 akhadas in Hinduism) is given about 45 minutes to get their procession moving, after which the next akhada gets started. Thus for 13 akhadas, the processions last all day. Participants cross the river on one of about 12 pontoon bridges that are built across the Ganges just for the duration of the Mela, and then are then be dismantled in early March.

Note that the missing element in these still photos is the all-round sound – everyone was singing and clapping, many were praying and dancing – not just those in the procession, but also the pilgrims who were watching the procession. We were enveloped by chants of  “Har har Mahadev” (Hail to Shiva). The colors were vivid – a profusion of reds, saffrons, and yellows. There was an overwhelming amount of joy, fervor, and energy. It was an extremely moving experience, to watch this enormous diversity of humanity celebrate their religion and the Ganges River.

The Naga Bawas, some carrying swords, others carrying tridents, led the procession for each akhada. They were covered only with ash, even though the temperature was 4-8oC, and the wind was icy and piercing. 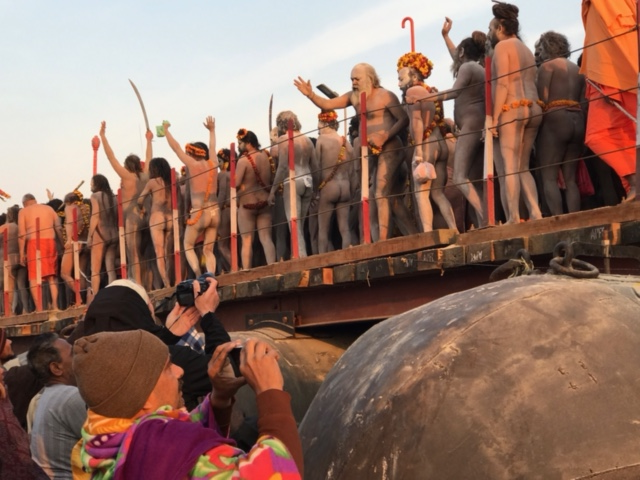 I had the strong impression that the paramilitary served just as a deterrent. Given the sheer numbers of people involved, they would have had a rough time managing any kind of massive riot.  But their presence in uniform probably serves as a clear signal to potential trouble-makers. 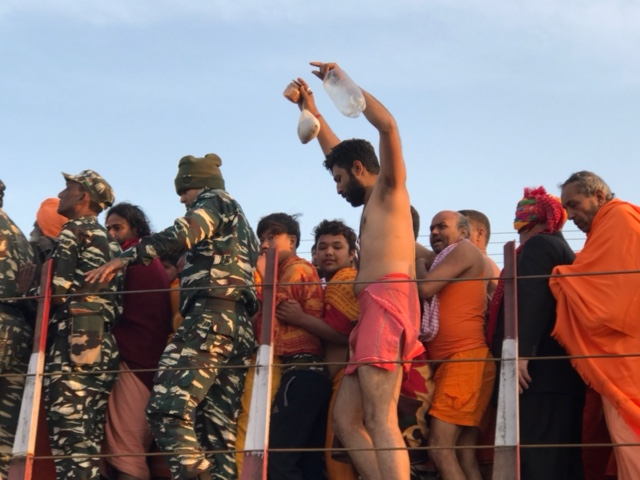 The procession was peppered by many “floats”, some quite elaborate. Important members of the akhadas were seated in these highly decorated trucks/vehicles, which were pulled by tractors. 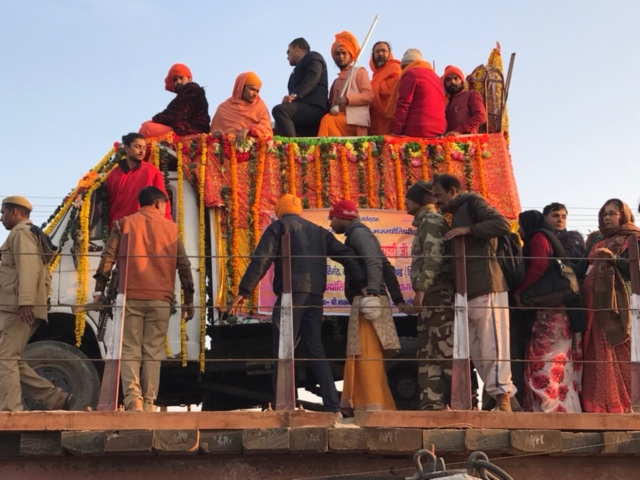 The processions for the larger akhadas seemed like they were more than a mile long. 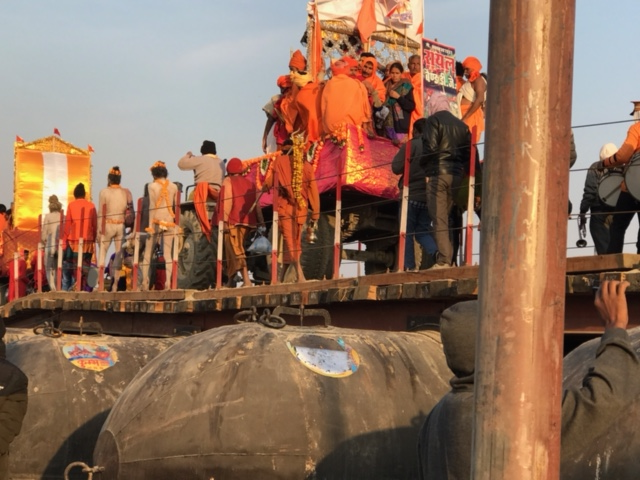 Meantime, on the river bank, people were watching the procession, or doing their own thing. The cluster of men below had built an open fire in the midst of everything and everyone – to light their cheroots. The pollution was unbelievable, mostly from open fires. 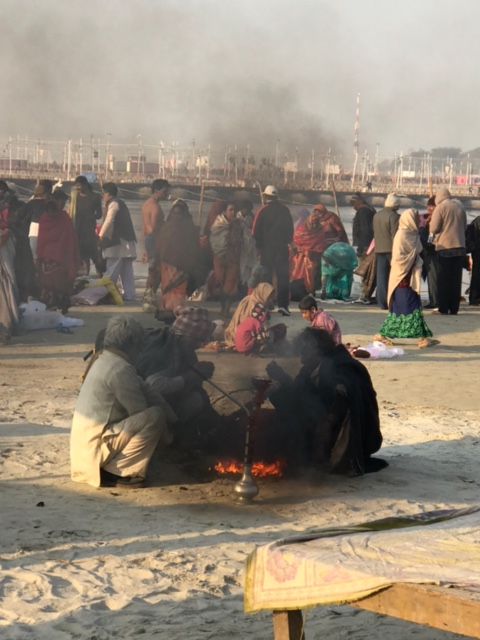 This man was putting on his make-up for the day.

Pilgrims watching the procession. While the men wandered all over on their own or in groups, the women almost always were found in clusters, sometimes with children in tow. 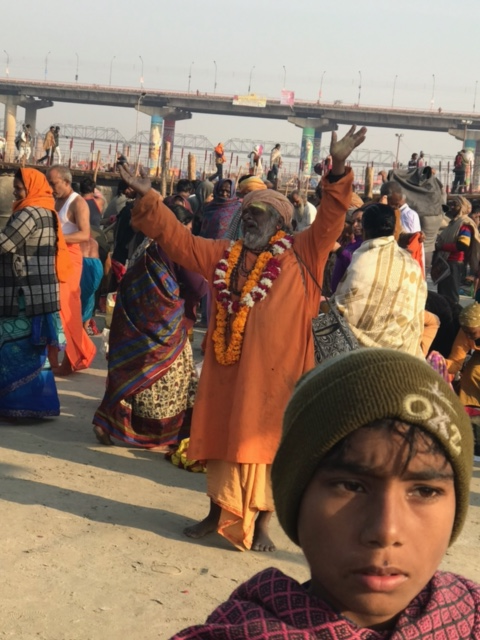 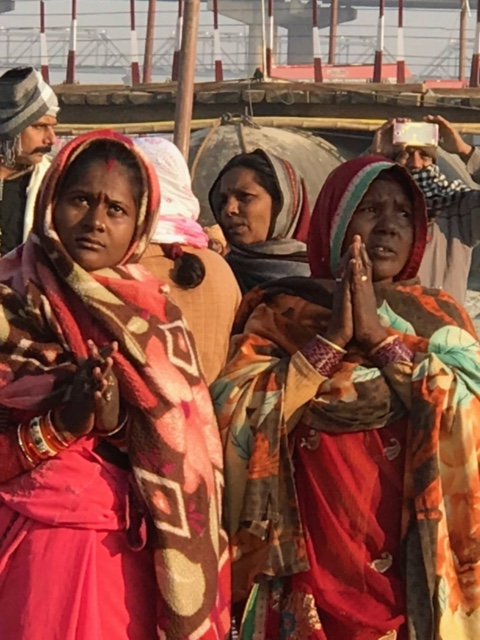 There was a clear presence of transgenders at this Mela. The one below earned some money by doing a sort of provocative dance. I read later in the newspaper that someone has started a ‘transgender akhada’. 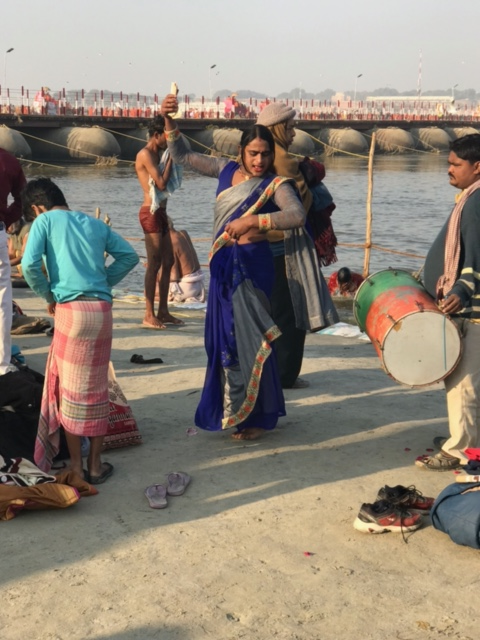 Flowers were sold everywhere – people use them as offerings to the Ganges. While the flowers are bio-degradable, masses of them collect along the shore, start to decay, and pollute the water. And unfortunately many garlands have plastic spacers between the flowers that tend to clog the waters permanently – consider that this year alone, 90 to 120 million people will attend the Kumbh Mela over a period of 5-7 weeks, and most of them will place at least one garland into the river.

Although one hears a lot  of talk about cleaning up the Ganges, the overwhelming majority of people will nevertheless place flowers, sometimes along with a coconut and incense, into the water the drive to make such an offering is very strong. This year I was happy to see that flowers were sold in paper containers, not ones made of aluminum foil (as they were six years ago)!  The government tries to limit use of non-biodegradable materials­ – but given the immense numbers of pilgrims, enforcing such regulations must be a nightmare. Many people – even highly educated ones – justify their offerings of these materials into the waters by convincing themselves that their action will not make a significant difference – but of course, every little bit matters! 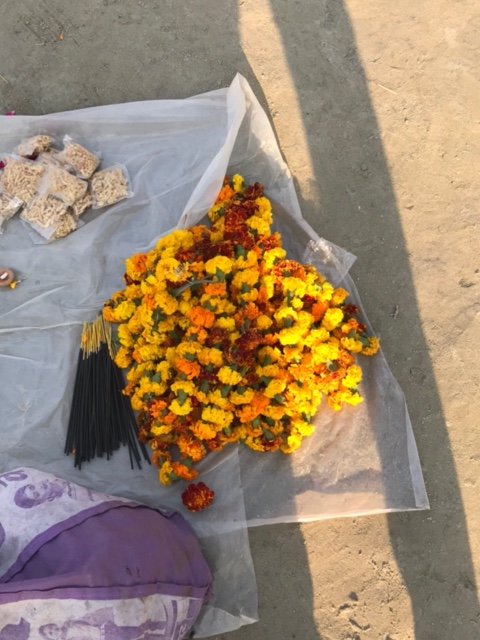 The man below had only one leg but was able to hop into the river, dip into the water, pray, and pull himself out – all while struggling with his crutch. The faith people have in the healing power of the holy Ganges is quite fantastic.

The boatman behind him would take you to the actual confluence site of the rivers. The boats used for this activity are very primitive, and the oars that are little more than pieces of wood screwed onto bamboo poles. Boat traffic is extremely heavy. The left side of my brain kept telling me that this was an accident waiting to happen. But the boatmen were very experienced and knew how to navigate among dozens of other equally dilapidated boats. To disembark, we had to jump from one boat to another and then to a third – all of them were very rickety. But we were surrounded by lots of helping hands: all you needed was faith that you would make it – and suddenly you were on land! 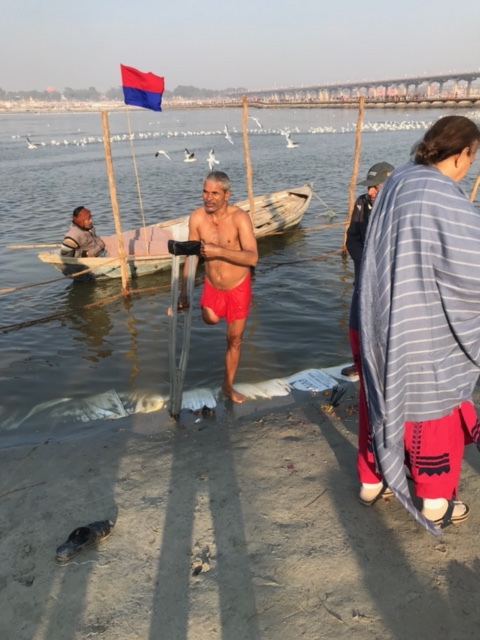 The plastic containers being sold below were filled with Ganga-jal, or water from the Ganges. People bring the water back home and use it in purification rituals. 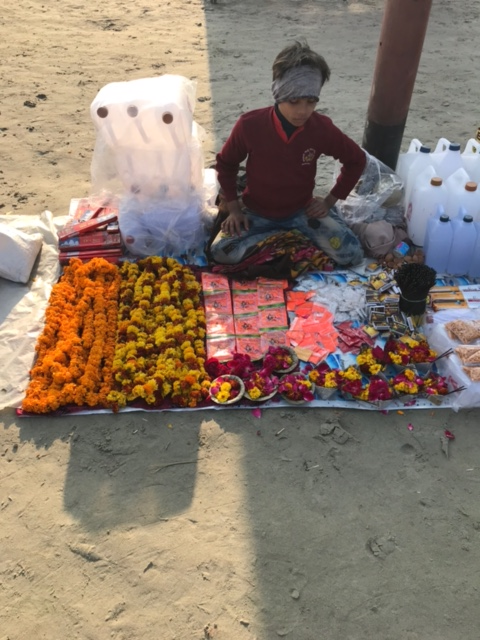 My cousin’s wife was traveling with us. At one point (below) she wanted to give money to some poor urchins but as soon as she brought the cash out of her pocket, she was mobbed – literally in a flash. The rapidity at which she was surrounded scared me as I watched her, but she handled the situation with calm and poise. 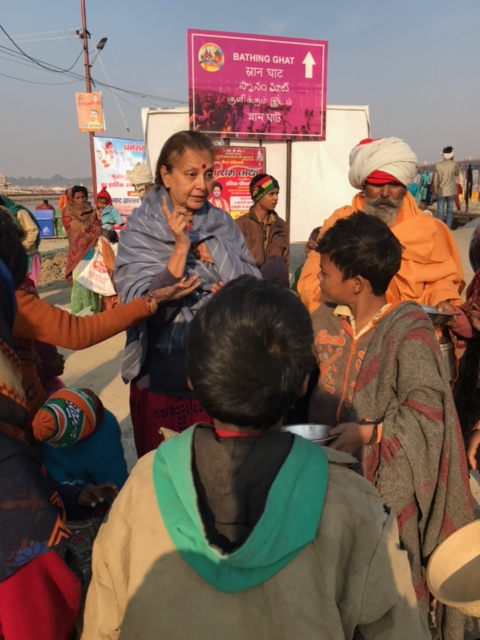 Overall, though, attending the 2019 Mela was a truly magical experience.

Air India to induct wide-body aircraft into its fleet