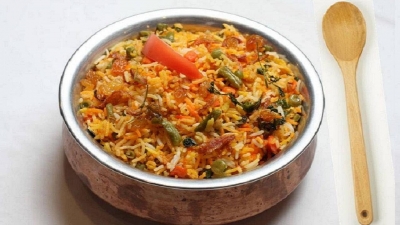 New Delhi– As contactless food became the norm in the pandemic-hit year, online delivery platform Swiggy on Tuesday said that some form of biryani was ordered more than once every second while home-cooked food was one of the most ferried items in 2020.

Over 3 lakh new users made their Swiggy debut by ordering in a chicken biryani, according to the data from fifth edition of Swingy’s annual ‘StatEATstics’ analysis.

“While we delivered 5 times as many orders to ‘Home’ addresses compared to ‘Work’ addresses between January and March, that number rose to 9 times as many Home orders vs. Work orders in April and May,” the report mentioned.

The company launched ‘Swiggy HealthHub’ in August, a curation of healthy food items.

While users in the National Capital Region (NCR) ordered the healthiest meals, Bangaloreans showed a high resolve to get healthy. At 130 per cent, the city saw the highest increase in healthy food orders on Swiggy HealthHub.

People ate an average of 342 calories for dinner. Lunches ranged at under 350 calories, while breakfast, the day’s most important meal, saw people consume an average of 427 calories.

“Our shortest delivery request came in from someone in Bengaluru and spanned a 600 metres to collect an empty water can from their home and exchange it for a full one at the store”.

“Meanwhile, our longest delivery spanned 39kms in Kolkata and involved the delivery of a SIM card,” Swiggy informed. (IANS)