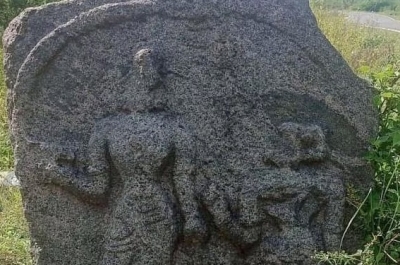 Sources in the Archeological Survey of India (ASI) told IANS that the students of the Dharmapuri Arts College are supporting the endeavour of the history enthusiasts’ group to unravel the 9th century Chola period stone.

The History Department of the Dharmapuri Arts college has conducted a detailed study on the stone and found that it belongs to the 9th or 10th century era.

The history department in its study found that the stone was rare and that the socio- cultural aspects related to the stone gives a clear indication that it belongs to the Chola period and that it was carved around the 9th or 10th century to honour a small king of the Chola dynasty.

The stone depicts the hero holding a sword in one hand and jewellery in the other hand and researchers of archeology and architecture told IANS that this type of Chola stone was rare and that further studies would unravel the mystery of the Adhiyaman dynasty and its connection with the Chola dynasty.

S. Illantharayan, of Thonman Varalatru Aaivu told the mediapersons that this particular hero stone has not been registered with the ASI and that they have appealed to the Government of India to protect such stones in Chalakudy Junction. (IANS)