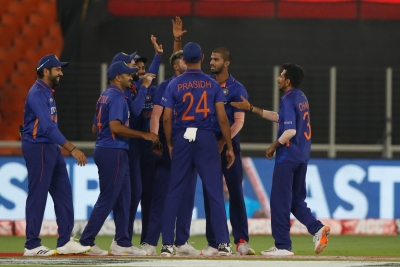 Ahmedabad– Half-centuries by Shreyas Iyer and Rishabh Pant followed by cameos from Deepak Chahar, Washington Sundar and the bowlers helped India register an emphatic 96-run win over West Indies in the third and final match at the Narendra Modi Stadium on Friday.

Chasing 266, West Indies were never in the hunt and were bowled out for 169 in 37.1 overs despite some fireworks from Odean Smith and Alzarri Joseph and Hayden Walsh showing some resistance. It is also the first time that India blanked West Indies in an ODI series.

Chahar tested the opening pair of Brandon King and Shai Hope with some movement available from the pitch. He was almost successful when King top-edged the third ball of the innings but it fell between mid-on and mid-off fielders. King survived a DRS call off Chahar and ended the over with successive boundaries.

Mohammed Siraj was the first bowler to strike, trapping Hope with a sharp nip-backer to hit him flush on the back pad. Hope didn’t take the review as replays later showed the ball was missing the stumps. In the next over, Chahar returned to take out King and Shamarh Brooks in the space of four balls. While King nicked an outswinger to first slip, Brooks sliced the ball straight to point, departing without troubling the scorers.

Darren Bravo and Nicholas Pooran amassed some boundaries but Prasidh Krishna broke the 43-run stand for the fourth wicket in the 14th over. Bravo played an expansive drive away from the body and edged to second slip. The extra bounce in the pitch helped Krishna in taking out Jason Holder as the ball hit the shoulder of the bat while defending and the edge flew to slip fielder.

Two balls later, Fabian Allen fell for a golden duck, enticed in driving forward by a returning Kuldeep Yadav. But the googly took the edge behind to Rishabh Pant. Allen took the review but replays showed a spike on UltraEdge.

Yadav returned in his next over to take out captain Nicholas Pooran, who went hard on the drive and edged to slip fielder. But Odean Smith gave a stunning exhibition of his clean ball-striking, taking Yadav for fours down the ground and through extra-cover. It was followed by back-to-back sixes over both sides of ‘v’.

Smith had luck on his side as Suryakumar Yadav dropped an absolute sitter at mid-off off Siraj. After hitting Yadav for another six over long-on, Smith had a streaky boundary off an outer edge off Siraj. Two balls later, Siraj ended Smith’s short-lived blitzkrieg as the right-handed batter mistimed to cover.

Joseph and Walsh frustrated India with a 47-run stand for the ninth wicket. Siraj broke the stand with a short ball directed towards Walsh, and the left-handed batter gave a simple catch to the leg gully. Krishna finished off the match as Joseph pulled and the top-edge flew to deep mid-wicket.

Earlier, on a pitch that was used in the second ODI on Wednesday, West Indies kept the Indian batters on a tight leash in the first ten overs before Iyer and Pant fought back with a stand of 110. For the visitors, Jason Holder finished with figures of 4/34 in his eight overs.

The start was excellent for West Indies as Joseph’s twin strikes put them in early control of the match. Captain Rohit Sharma and Virat Kohli departed in a span of three balls in the fourth over. While Sharma chopped on to flatten his middle-stump, Kohli was strangled down leg for a two-ball duck.

Shikhar Dhawan struggled to get off the mark till he lofted Kemar Roach over deep extra cover for a six in the seventh over. Dhawan’s scratchy stay at the crease came to an end as he cut the short ball from Smith. But the extra bounce on the ball took the top edge straight to Holder at slip.

Pant and Iyer joined forces to forge an important partnership to steer India out of trouble from 42/3. Iyer was fantastic in playing a cheeky uppercut followed by a straight drive off Smith in the 16th over. Pant, on the other hand, started off watchfully and then the boundaries began to flow off his bat. Once the partnership for the fourth wicket crossed the half-century mark, boundaries began to flow consistently from the bats of both Pant and Iyer.

Iyer was the first to reach fifty off Walsh in 74 balls. Two overs later, Pant reached his fifty-off Allen in just 47 balls. Neither of the duo took any unnecessary risk, barring the huge mix-up in the start, as the run rate began to increase. The partnership of 110 off 124 balls for the fourth wicket was broken by Walsh as Pant tried to cut close to his body but the ball bounced a little and took a faint toe-edge to Hope.

Iyer continued to march forward despite losing Suryakumar to a sharp catch at point while trying to take on Allen. Five overs later, in a bid to go big against Walsh, Iye’ went for the loft but didn’t get to pitch of the ball and picked out long-off, departing for 80.

Chahar displayed his hitting prowess while using his feet to give India a late flourish alongside Sundar. Chahar took Walsh to the cleaners in the 44th over, slamming fours down the ground and over backward point followed by tonking a six over wide long-on. Though Chahar was undone by a slower bouncer from Holder in the 46th over, he had done his job for giving India some momentum in the fag end of the innings.

Holder took out Yadav before Sundar played some exquisite shots off him and Joseph. Eventually, Holder forced Sundar to give a simple catch to extra cover in the final over before taking out Siraj on the last ball of the innings for his fourth scalp. But the poor batting performance throughout the series hitting a hat-trick meant West Indies were never in sight of avoiding a clean sweep.