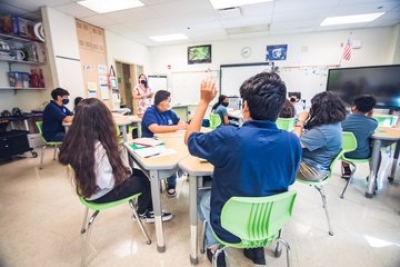 Chicago– Chicago Public Schools (CPS), the third largest school district in the US, has reported 245 Covid-19 cases and more than 5,400 close contacts of the infected in the first two weeks since the resumption of in-person classes, local media reported.

Among the 245 confirmed cases reported from August 29 to September 11, 155 were students and 90 were adults, Xinhua news agency quoted the Chicago Tribune as saying in a report on Thursday.

In the first week of classes, CPS posted the number of Covid-19 cases, people in quarantine and quarantine pods — small class sizes with an average of 15 students.

In the second week, it posted instead the number of cases and close contacts, those coming within 6 feet of an infected person for at least 15 minutes in a 24-hour period.

The Chicago Teachers Union doubted that CPS had provided a complete count of cases and close contacts on its tracker.

The district has repeatedly missed its own deadline to provide free Covid-19 tests for the 9,400 students and 6,200 staff members who have signed up for the weekly testing program.

It initially planned to set up testing district-wide by September 1, then postponed the date to September 15.

CPS said it expects to offer nasal swabs at 170 schools this week, far fewer than the 500-plus district-run schools.

It is unclear how many people have been quarantined since the start of classes, as those fully vaccinated as well as asymptomatic cases are not being directed to quarantine for the standard 14-day period.

Besides, children aged under 12 are not eligible for Covid-19 vaccines.

Some parents are urging CPS to allow all students to participate in remote synchronous learning, not just those enrolled in the district’s Virtual Academy that are “medically fragile”, or those under quarantine for either testing positive or being close contacts.(IANS)