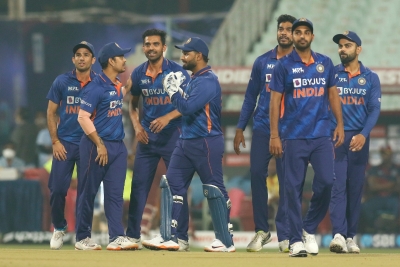 Kolkata– A power-hitting show from Nicholas Pooran (62) and Rovman Powell (68 not out) was not enough for West Indies to stop India from winning the second T20I by eight runs at the Eden Gardens on Friday.

Set to chase 186, West Indies needed 29 off the last two overs. But Bhuvneshwar Kumar and Harshal Patel kept their calm to bowl India to winning the match and series.

Kumar and Deepak Chahar kept the openers Brandon King and Kyle Mayers in check till the former drove down the ground. King and Mayers slammed a boundary each till Yuzvendra Chahal separated the duo in the final over of power-play. Chahal cramped Mayers for room, leading in the attempted flick giving a top-edge to the leg-spinner for an easy catch.

Pooran, who slammed a fifty in the first match, hit boundaries off Chahal and Patel to kickstart his innings. He was also fortunate in surviving a run-out attempt from Kohli. West Indies’ struggle against spin continued as King skipped down the pitch to loft but holed out to long-on off Ravi Bishnoi.

Pooran received another life at 21 when Bishnoi dropped his catch off Chahal. To rub salt into the wound, Pooran slammed a colossal slog-sweep over deep square leg for six. Pooran then crunched Chahar for a fierce pull through deep mid-wicket. Powell, on the other hand, slammed a six each off Chahar and Bishnoi over long leg and long-off respectively to keep West Indies in the hunt.

Powell and Pooran collected a four each off Bishnoi as West Indies now needed 63 runs off the last five overs. Powell was given a reprieve at 38 when Kumar couldn’t complete a catch off his own bowling. In the next over, Powell smoked Chahar over deep mid-wicket, which was followed by Pooran reaching his second fifty on the trot in 34 balls with a six over fine leg.

Powell reached his fifty in 28 balls as Pooran snatched a four off Patel to bring the equation to 29 runs off the last two overs. In a bid to go big, Pooran miscued the slog off Kumar and Bishnoi, under pressure at cover, held on to the catch. Kumar gave away just four runs in a brilliant 19th over.

But Powell hammered back-to-back sixes, including a 102-m hit, over long-on, to keep Patel under pressure. Patel, unfazed by the sixes, held his nerve to concede two singles in the last two balls to seal the series for India.