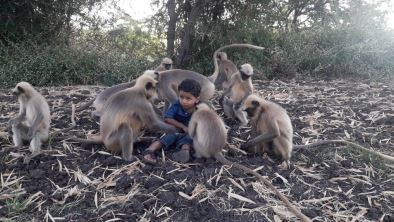 Allapur, Karnataka–Two-year-old Samarth Bangari from Allapur village in Dharwad district in the northern part of Karnataka has been attracting visitors from across the state for a special bond that he shares with monkeys.

Samarth’s parents, Sunil and Nanda Bangari, who are farmers, noticed a few months ago that the young boy was very comfortable with monkeys when he was playing with nearly a dozen langurs around him in an open field outside his home.

“Initially, we were worried if the monkeys would hurt our boy. But we realised that even the monkeys were fond of him and they liked each others’ company,” Samarth’s uncle, Mallikarjun Reddy, told IANS.

Each morning, the langurs living in the nearby fields flock to Samarth’s home in the village, which is located about 400 km to the northwest of state capital Bengaluru.

“Nearly 20 monkeys land up at our house each morning by around 6 a.m. and wake Samarth up to play with him. They don’t come close to anyone else in the house but the boy,” Reddy asserted.

The simians are said to pay at least two visits each day, in the morning and evening, to see the child, who shares his food with them.

On many days, the child spends more time with the langurs than with his six-month-old baby brother, Reddy noted.

Over the months of daily visits paid by the langurs, Samarth has never been harmed by them even once, the boy’s maternal uncle said.

“The villagers are amazed at the friendship that Samarth has with the monkeys. They believe that he is blessed by Lord Hanuman (commonly known as the Monkey God),” Reddy said.

With the word about this special friendship spreading, people from across the state are now visiting the boy in the scores each day, he added.

“We have visitors from nearby villages, Hubballi (about 10km from here), Bengaluru and other districts coming all the way to our village to witness Samarth’s love for monkeys.”

Realising the boy’s affection for the animals, the family now makes food for the monkeys.

“We make around 100 rotis (flat bread) for Samarth to feed around 20 langurs that visit him each day,” Reddy said.

The family is ecstatic to see that the simians, which are usually known to hurt the people, are so friendly with their child, he added.

“My family is over the moon with the attention that this unusual friendship is bringing from across the districts,” Reddy said. (IANS)