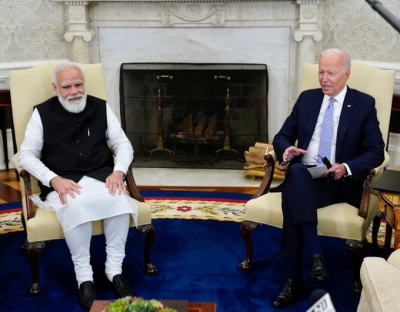 New York– As the countdown nears for Russia’s scheduled delivery of an anti-missile defence system to India, two influential US Senators have warned that imposing sanctions on India for buying the equipment could have a “deleterious effect on a strategic partnership” between Washington and New Delhi and asked President Joe Biden to waive the action.

Democrat Mark Warner and Republican John Cornyn wrote to Biden on Tuesday, against imposing sanctions under the Countering America’s Adversaries Through Sanctions Act (CAATSA) that prescribes the retaliatory action on countries buying defence equipment from Russia.

Russia is to start delivering the anti-missile air defence system to India in November under a 2018 agreement and trigger the sanctions putting the Biden administration in a quandary over how to deal with a nation that is emerging as a close defence partner and an ally in its Indo-Pacific strategy to face China’s challenges.

“We strongly encourage you to grant a CAATSA waiver to India for its planned purchase of the S-400 Triumf surface-to-air missile system,” the co-chairs of the Senate India Caucus said in the letter released by their offices.

“In the case of this current S-400 transaction involving India, we believe that the application of CAATSA sanctions could have a deleterious effect on a strategic partnership with India, while at the same time, not achieve the intended purpose of deterring Russian arms sales,” they said.

Joint steps to safeguard US technology and promote military interoperability can “reinforce India’s status as a major Defence partner and will provide another avenue to counter PRC (People’s Republic of China) influence in the Indo-Pacific,” they added.

The risk of sanctions comes up as the US and India are developing closer defence and strategic ties with an emphasis on the interoperability of their systems enabling their militaries to work together.

India’s Chief of Defence Staff, General Bipin Rawat and US Chairman of Joint Chief of Staff General Mark A. Milley in September discussed interoperability between their militaries, the latest in a series of meetings at various levels on the subject.

The US has designated India as a major Defence partner giving it the status in many respects equivalent to its NATO and other treaty allies.

India has also been diversifying defence equipment purchases, buying more from the US and European countries like France as well as Israel.

“India has taken significant steps to reduce its imports of Russian military hardware in recent years. From 2016 to 2020, there was a 53 per cent drop in Russian arms exports to India compared to the preceding five-year period. Meanwhile, India has shown its intent to purchase equipment from the United States, with sales reaching $3.4 billion in FY20 (fiscal year 2020),” the US Senators pointed out.

India also has a contract to get four frigates and to lease a nuclear-powered submarine from Russia.

After Turkey defied the US and went ahead with buying the S-400 system, the former President Donald Trump’s administration imposed sanctions during its last days on its NATO ally.

The sanctions banned all US export licenses and authorizations to the government’s defence equipment arm, Presidency of Defence Industries, and freezing assets and restricted travel of its top officials.

China, which has bought the S-400 equipment and SU-35 jet fighters, is the only other country sanctioned under CAATSA.

India formally signed the agreement to buy the S-400 estimated to cost between $4 billion and $5.5 billion in 2018 from Russia, which has been its main defence supplier, and paid an advance of $800 million in 2019.

Cronyn and Warner, however, said that they shared concerns about the S-400 purchase and “the continued Indian integration of Russian equipment, even with these declining sales,” but said the administration should continue reinforcing the concern and support them in finding alternatives.

“We also propose that your administration establish a bilateral working group to identify ways to promote the security of U.S. technology, and to chart a path forward to develop strategies to enhance US-India military interoperability,” they added.

Former Defence Secretary Jim Mattis, a retired general, and former Secretary of State Rex Tillerson are among US experts calling for a sanctions waiver for India. (IANS)