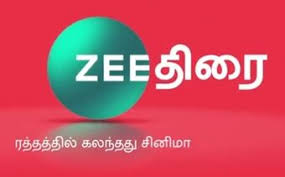 Zee Thirai will take on KTV from the Sun TV group.

The brand tagline for Zee Thirai – “Rathathil Kalandhadhu Cinema”, which implies that “Cinema runs through our veins”, represents the passion and impact that movies have on the Tamil viewers and its power to fuel the heroic spirit in them, the statement said.

According to ZEEL, the new Tamil movie channel has over 400 films in its library across genres.

The channel will be present across leading DTH operators that includes Tata Sky, Airtel DTH, Dish TV and D2H. Cable television subscribers can subscribe to the Zee Prime Movie Pack Tamil at Rs 12 consisting of Zee Tamil, Zee Thirai along with other ZEEL channels.

“Today, our channels – Zee Kannada, Zee Telugu, Zee Cinemalu, Zee Tamil and most recently Zee Keralam contribute to over 28.5 per cent of our network share, thus showcasing our strong connect with the South markets,” Siju Prabhakaran, South Cluster Head, was quoted as saying in the statement. (IANS)