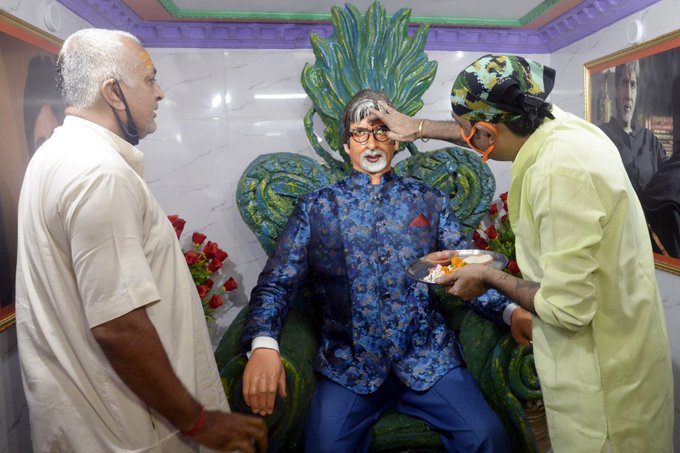 Kolkata– Ever since their “guru” has been hospitalised with Covid-19, Amitabh Bachchan fans in Kolkata have started praying for his speedy recovery. While the veteran actor was hospitalised on Saturday evening, a yagna was performed at Kolkata’s Amitabh Bachchan temple, which continued overnight till Monday morning.

“We performed the yagna through Sunday, and it ended early on Monday. After that we have been continuously doing the Om Namah Shivaay ‘jap’ in his name. I stay up all night to perform the ‘jap’. When I go to bed in the morning, my wife and son take over because it has to be performed continuously. We will continue with the ‘jap’ till he returns home, even if it takes 10 days or more,” Amitabh Bachchan temple founder Sanjay Patodiya told IANS.

The temple was closed to visitors since the beginning of the nationwide lockdown in March, though regular puja, aarti, offering of bhog to Amitabh Bachchan and his late parents have continued on a daily basis, informed Patodiya.

Despite waterlogging in the area due to the ongoing monsoon season, the temple will be reopened on August 2, a day that is celebrated by Amitabh Bachchan’s fans worldwide as the day of his “rebirth”, because on that day the actor recovered from the near-fatal accident he had suffered on the set of “Coolie” in 1982.

“A mangal kamna yagna will be performed on the day of guru’s Rebirth Day and the temple gates will opened for visitors, even though social distancing will be strictly maintained. We celebrate August 2 every year in a bigger way than we celebrate his birthday because that day is extremely special to us. The day will be celebrated this year, too,” informed Patodiya, whom Big B had mentioned in his blog post on his birthday earlier this month.

Members of All Bengal Amitabh Bachchan Fans’ Association are extremely worried about his health but they are confident that the “legend” will fight back because he is “God’s chosen one”, and their constant prayers, for his recovery cannot fail!