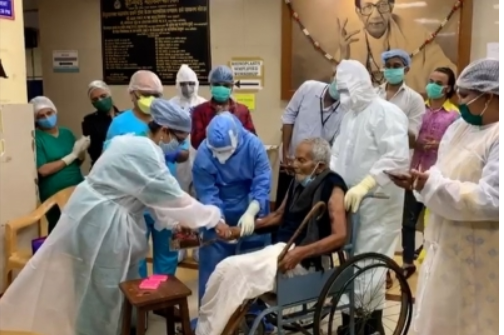 Mumbai–In the most cheerful news from Mumbai — the country’s worst-hit city by Covid-19 — on the eve of celebrating his ‘century’, a 100-year-old ex-teacher conquered the Coronavirus and was discharged from a government hospital on Tuesday afternoon.

Finally, after two weeks of intensive treatment and care at the hospital, Naringrekar — born in Naringre village of Sindhudurg on July 15, 1920 — was fully cured of the virus and discharged on Tuesday.

On learning that it was his 100th birthday on Wednesday, the Corona warriors at the hospital including doctors, nurses and other care-givers organised a surprise birthday-eve celebration for him.

As Naringrekar was wheeled out in the hospital complex, he was greeted with a cake bearing candles depicting his 100th birthday, and amid a song and clap, he cut the cake.

“When he was found Covid-19 positive two weeks ago with his 100th birthday round the corner, the entire family comprising children, grandchildren and great-grandchildren was shattered. They immediately admitted him from their Kandivali home to the Jogeshwari hospital for treatment,” said a civic official.

Given his advanced age and frail health, the doctors, nurses and other staffers took extra care of their avery-senior patient’ during his stay in hospital. After some family members were infected, even the 100-year-old man, with symptoms of pneumonia, got infected.

In view of his teaching background, Naringrekar – who retired on July 31, 1978 – proved to be an extremely disciplined and cooperative patient, but even the healthcare givers occasionally got a taste of the rigid taskmaster and his loud voice…!

At the end of the treatment, the hospital arranged a cake for him, while Naringrekar was all smiles, he profusely thanked and blessed all the care-givers before being taken home by his family.

It may be recalled that on June 30, a 103-year old great grandpa, Sukha Singh Chhabra of Thane became the oldest man in the country to conquer Covid-19 and return home. (IANS)