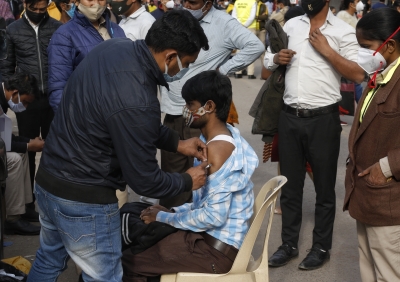 New Delhi– While the active caseload has reported a marginal decline in India, the country is seeing a surge in deaths due to Covid-19.

A week back on January 26, India reported 2,85,914 fresh cases and 665 deaths in 24 hours. Since then, there has been a constant dip in new infections. However, the number of fatalities has risen steadily.

“Deaths lags about 2-3 weeks behind cases. It takes that much time for people to be severely ill, be hospitalised and managed there till they succumb to the disease,” Shahid Jameel, Visiting Professor, Ashoka University, told IANS.

Globally, Omicron accounts for about 70 per cent infections at this time, with Delta accounting for about 30 per cent.

The variant, touted as majorly causing mild illness, had initially led to a spike in Covid case numbers, but the number of Omicron cases have been much less in India.

“The third wave in India is also mostly driven by Omicron. The Omicron figures are much less than daily positive cases because the former is determined only after genomic sequencing, whereas the latter is based on PCR and rapid tests,” said Jameel, who is also Senior Research Fellow at Green Templeton College, Oxford University.

“Not all positive cases are sequenced to determine the variant virus,” he added.

India is expected to see a peak in the wave in early to mid-February.

“The peak will differ in different states and should eventually start to flatten by the end of March,” Dr. Kiran G. Kulirankal, from Division of Infectious Diseases, at Amrita Hospital, Kochi, told IANS.

However, it is too early to predict the end of Covid, he noted.

Kulirankal contended that although initial data shows Omicron variant to be highly transmissible but less severe than Delta, this is not the case while considering high risk groups.

It comprises the elderly, immunocompromised, patients with chronic kidney disease, chronic liver disease, uncontrolled diabetes, those on immunosuppressive medications and patients with malignancy.

“The weakened immune system fails to prevent the progression of the disease to its severe form leading to increased morbidity and mortality,” Kulirankal said.