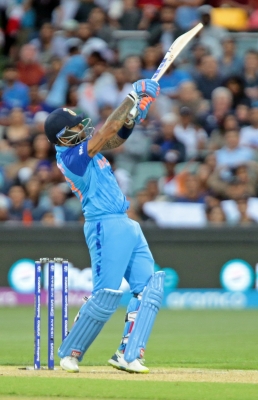 Dubai– Former India cricketer Yusuf Pathan has said that the fans and media should not put too much pressure on Suryakumar Yadav by constantly taking just about him, adding that he hopes to see the star batter keeps producing match-winning performances for the Men in Blue.

The 32-year-old Suryakumar has been in sensational form and recently smashed his third T20I century during the series against Sri Lanka at Rajkot. He will be crucial for India’s success at the 2023 ODI World Cup.

“Surya is batting brilliantly at the moment and I hope he continues doing that for the Indian cricket team. But, there are others players also, who are also doing well for the team, so we should focus on them as well. We should not put too much pressure on Surya by constantly talking about him. We have seen that players come under pressure, where there is too much chatter about him.

Yes, we should praise his performance but others should be also complimented which will ease the pressure from Surya,” Yusuf, who is playing for Dubai Capitals at ILT20 told IANS in an interview.

“If we keep things simple, it will help both Surya and the Indian cricket team,” he added.

Asked if having too much talent in the country also puts much pressure on players to perform constantly, the all-rounder said it’s a good headache to have.

“Having a big pool of talented players is a good headache for the Indian cricket ecosystem. Every player playing at different levels should believe that if they perform well, they will represent the country one day,” he said

The 40-year-old also mentioned that the spin bowling all-rounders will play a vital role during the ODI World Cup in India.

“All-rounder definitely makes things easier for both the team as well as the captain. It gives captain options to try different match-ups at various stages of the game. Since the 2023 ODI World Cup is happening in India, spin bowling all-rounders as well as batters who can bowl spin will play a vital role,” he said.

There have been talks among cricket experts regarding modern day batters not bowling, which doesn’t help team combination. However, Yusuf feels it’s up to the individual.

“It depends on the individual’s choice, whether he wants to bowl or not. During the 2011 World Cup, we had many options in Virendra Sehwag, Sachin Tendulkar, Yuvraj Singh, Suresh Raina and me, who could bowl and give various options to the captain. Yuvraj even became the Player of the tournament as he gave India crucial wickets during the tournament and the world already knows about his batting exploits,” Pathan said.

Talking about ILT20 he said,” We started the tournament with a win and also competed well in the second game, which is important for the team. So many renowned players have come to take part in the ILT20 which is a great thing for UAE cricketers and they will learn a lot from the stars of the game. (IANS)