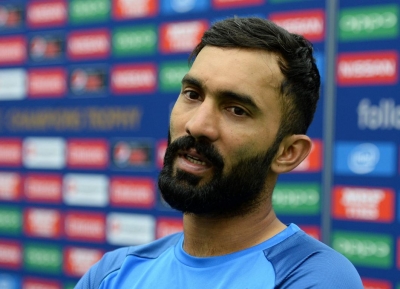 Mumbai– India’s wicketkeeper-batter Dinesh Karthik on Tuesday said with the current set of players India have, “we stand a strong chance of winning the T20 world cup this time”.

Karthik said that being a disciplined student of cricket he would love to reprise his role again in the Indian jersey on the ground.

Karthik has represented India in a number of roles since 2004, including wicket-keeper, flamboyant opener, solid middle-order batsman, and clinical finisher.

In the ongoing IPL, he has played a key role in RCB’s current success with his batting and wicket-keeping skills and has emerged as a promising name for playing eleven for the upcoming T20 World Cup.

Earlier on Tuesday, Karthik was appointed as the brand ambassador of Gizmore, India’s accessories and fitness gear brand.

“I am ecstatic and honoured to be connected with Gizmore, a brand to which I can relate so readily. As an athlete, I’ve always believed in continuously pushing the limits and raising the bar for performance.”  (IANS)